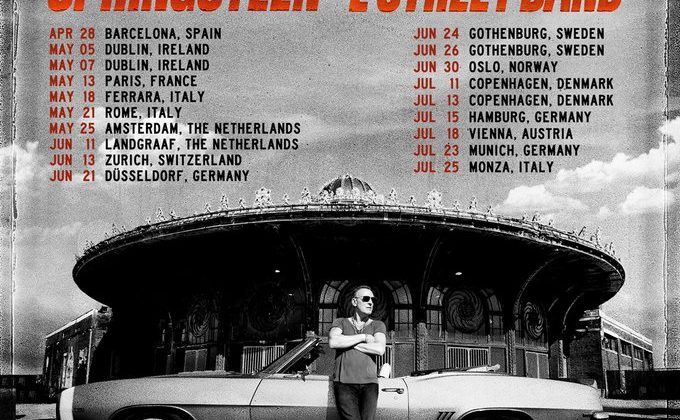 Springsteen has upcoming shows in State College, Baltimore, Newark, Brooklyn, Philadelphia. Ticketmaster is selling some seats for as high as $4,300. The worst seats in the house are going for $185.00 before fees.

For the last fifteen or so years we have always gone to Boss concerts as a family. So when the new tour schedule was released we started planning. My daughters live in Michigan, so perhaps, we thought, we could all converge in Detroit for the March 29th show. Maybe we could even bring their boyfriends with us this time. (The March 29th date, it turns out, is a Wednesday. I teach on that day). Or maybe we can all meet up in State College or Columbus or Cleveland?

But with inflation being what it is, gas prices out of control, and these awful Ticketmaster prices, I am not hopeful that any of this is going to happen. Frankly, I am not sure we can afford the luxury of seeing Bruce right now. I’m still wracking my brain about a possible solution, but it’s not looking good.

Here is Bobby Olivier at NJ.COM:

Many jilted Bruce Springsteen fans were still fuming Thursday morning, and for good cause. As some of The Boss’s 2023 U.S. concert dates went on sale Wednesday, prospective buyers were met with massive sticker shock — floor seats skyrocketing to more than $4,000 each retail, due to Ticketmaster’s “Official Platinum” dynamic pricing model, which allows costs to fluctuate based on supply and demand.

After my story reporting the unruly price hikes published Wednesday, I received dozens of emails from irate fans, most of whom repeated the same sentiment: Springsteen, the artist who has defined his career by singing about working-class and disenfranchised Americans, has forgotten his fans. They mirrored the notes I was sent in 2017, when “Springsteen on Broadway” tickets climbed to $850 each for orchestra seats.

And in both cases, who could blame such resentment? It is exceedingly clear that Bruce Springsteen does not care how much a given fan spends to see him play. If he did care, the rock icon who recently sold the rights to his publishing catalog for a cool $500 million — and whose concert tours typically rake in around $200 million at the box office — would refuse to work with Ticketmaster, finance the shows himself, buy permits to use unoccupied fields across America and set a ticket price he alone could control. He’d call it Brucestock or something and pocket considerably less from the fans who’ve supported him for half a century.

But, of course, he won’t do this, because no one does. As with all A-list acts, fans expect Springsteen to play their local arena or stadium, those venues usually have binding contracts with promotional juggernaut Live Nation to operate the performances, and Live Nation merged with Ticketmaster in 2009, creating a smothering entertainment conglomerate that essentially forces artists — who in many cases must also adhere to the desires of their record labels, which in turn have deep-seated relationships with Live Nation and Ticketmaster — to use Ticketmaster to fill their shows, turning a blind eye as fans are price-gouged over and over.

The great irony is that just before the ‘09 merger, Springsteen and his longtime manager Jon Landau condemned the move in an open letter, saying it would be “returning us to a near monopoly situation in music ticketing” as they also railed against Ticketmaster directing their fans to a secondary site to purchase seats for inflated prices.

So perhaps it’s not that Springsteen doesn’t care about his fans, but if he did care, what would it matter? There are too many variables, too many hands in the cookie jar. Repeated requests sent to spokespeople for Springsteen, Live Nation and Ticketmaster for comment were not answered Wednesday or Thursday, but as someone who has covered the live music industry for a decade, this is my educated guess as to what happened Wednesday: Springsteen was surely aware that demand to see his first concert tour in seven years would be exceedingly high. It was also likely he knew his ticket prices on Ticketmaster could fluctuate based on demand — an increasing trend over the last few years, especially since shows returned after the pandemic shutdown (and the industry lost $9.7 billion in ticket sales in 2020 alone).

But I’m not so sure he fully understood retail prices for floor seats — which were only $164 after fees on his last tour in 2016 (using MetLife Stadium prices) — could balloon to more than $4,300 each at face value. Typically, those outlandish prices are saved for “ticket brokers” (see: scalpers) reselling tickets on secondary market sites like Stubhub and SeatGeek at unholy markups.

By no means should Springsteen be let off the hook, however. You’d be a fool to assume Landau and Bruce’s agent didn’t understand what could and would happen. At the very least, he should release a statement explaining his involvement and apologize to his droves of lifelong fans who feel as though they’ve been priced out for good and will never be able to see him perform again. Any and all backlash is deserved; it’s his name on the stub.

Springsteen’s upcoming area shows, in Newark (April 14), New York (April 1), Brooklyn (April 3) and Philadelphia (March 16) don’t go on sale until next Friday, July 29 (Philly goes on sale July 26), and another wave of price hikes and subsequent frustration should be expected. Can anything actually be done before then to rectify this problem, where tippy-top arena nosebleeds jump to more than $200 a pop, as they already have in other Tampa, Tulsa and Denver?

The short answer is no. The fact is, no matter what the price is, someone will eventually pay it. Perhaps not $4,300, but as Ticketmaster’s dynamic pricing presumably would allow that price to slowly fall, someone will grab it around, say, $1,000. Other ravenous fans will cave at the last moment and reason that if they don’t go now, Springsteen — 73 years old by the time this tour happens — may never stop by again.