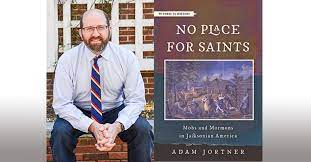 The Mormon History Association, or MHA, honored Goodwin-Philpott Professor of Religion Adam Jortner in the Department of History with its annual Best Book Award for his latest work, “No Place for Saints: Mobs and Mormons in Jacksonian America.”

MHA recognized “No Place for Saints” with the Best Book Award for excellence in Mormon history scholarship. Jortner said he’s honored to be included in a list of winners who have shaped how the country talks about faith and politics in America.

“It’s such a huge honor. I still can’t quite wrap my mind around it, especially since the MHA isn’t just academic historians—a lot of everyday Mormons participate and shape what they do,” Jortner said. “And being able to contribute to how this country talks about religion, and push that in a direction of civility and peace—that’s pretty much all I’ve ever wanted to do as a historian.”

Jortner’s book follows the Mormon church from its beginning through its expulsion from the state of Missouri in the mid-1830s and argues how Mormonism and violent anti-Mormonism shaped American religious history. The book explores themes of religious liberty, religious hatred and how different faiths interact in American history.

“This is the story of the early Mormons, presenting a whole bunch of different ideas about Christianity in the early U.S., and how some folks tried to stop them by preaching—and some folks tried to stop them by shooting,” Jortner said. “In just three years after Mormonism was founded, the arguments about Mormons go from jokes about Mormonism to the need to shoot Mormons. So, I hope people will start to see that cruelty in our language can lead to cruelty in our actions.”

“No Place for Saints” is available in bookstores and online.