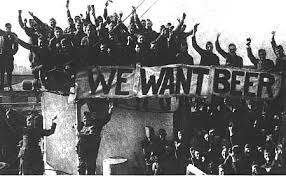 The Georgetown University historian of the American Left compares the backlash to Dobbs vs. Jackson with the backlash against prohibition in the 1920s. Here is a taste of his piece at The New York Times:

Once the dry movement got the Constitution on its side, resistance to its mission intensified. Canadian distilleries shipped thousands of cases of whisky across the border. Al Capone and other urban gangsters became fabulously wealthy forcing speakeasies to sell only the alcohol the mob provided. Applauded by many Catholic and Jewish voters, mayors in New York and San Francisco denounced the law — and refused to help effectively enforce it.

Underfinanced, understaffed and often unmotivated police forces could not prevent people from violating the law, whether those criminals were armed with submachine guns or just a bourbon and soda. A mere 129 federal agents were helpless to prevent New York City from becoming a metropolis of lawbreakers.

The prohibitionists thus lost their reputation as a movement of compassionate idealists and got saddled with a new one: allies of a state bureaucracy that lashed out, clumsily, at anyone who did not behave like a devout rural Protestant, a group that included Catholics and Jews, as well as wealthy city dwellers.

With the onset of the Great Depression, the resistance to Prohibition emerged as a political juggernaut. Black and white workers in the urban North reacted to the harsh coercion of the federal state by voting for wet Democrats. In 1932, they rallied to the presidential campaign of Franklin D. Roosevelt, who vowed to help speed the end of national prohibition. A year later, Roosevelt happily announced the ratification of the amendment repealing what Herbert Hoover, the president he had defeated in a landslide, had called “the great experiment.”

Of course, the political challenge of stopping abortions will differ from the challenge of abolishing the traffic in alcohol. State, not federal, authorities are in charge now, and they may face less of a backlash from constituents, many of whom have long sympathized with the anti-abortion cause. And it would most likely be more perilous to operate a safe underground clinic than it was to run a speakeasy in places where most people considered saloons a permanent, if sometimes regrettable, feature of urban culture.

Yet, in some ways, the anti-abortion movement after the Supreme Court’s Dobbs decision is actually weaker than was its moralist precursor when prohibition became the law of the land. Nearly 60 percent of Americans disapprove of the Dobbs decision. And while many conservative Christians of all denominations think abortion is sinful, they no longer command public opinion as did evangelicals a little over a century ago. In addition, the two major parties are now firmly planted on opposite sides of the issue, whereas prohibition had bipartisan support. And young women, vital foot soldiers in the bygone dry army, now overwhelmingly oppose the judicial and legislative effort to police their wombs.