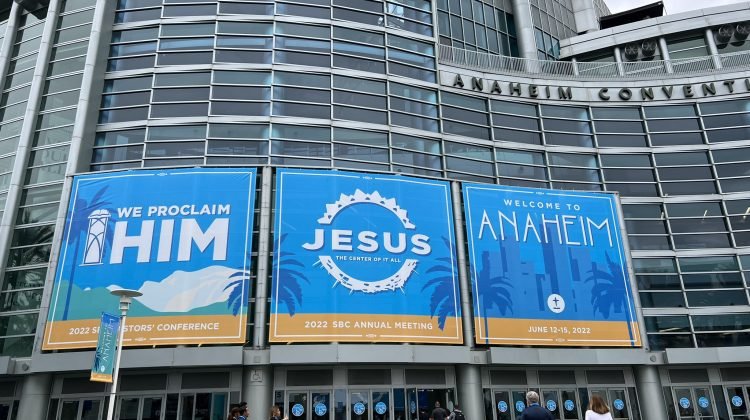 Yes, the Southern Baptists are meeting in Anaheim this week. Later today they will elect a new president. We don’t have the time or the staff to follow all the details, so I am relying heavily on other more competent reporters and analysts this week. Let’s see what is going on so far:

Liam Adams and Katherine Burgess of The Tennessean are offering live updates.

On Sunday, non-Southern Baptist John MacArthur spoke to the Conservative Baptist Network (CBN). According to religion reporter Michelle Boorstein at The Washington Post, the CBN is an “upstart group that some observers have compared with the MAGA wing of the Republican Party.” Here is a quote from MacArthur’s sermon: “You don’t advance the kingdom of God by lining up with the kingdom of Satan. You will never advance the kingdom of God by being popular with the world. If you think you will, you’re doing the Devil’s work. How can you negotiate with the people who hate Christ, hate God, hate the Bible and hate the Gospel.” These are interesting words coming from a guy who supported Donald Trump for president, but I digress. MacArthur did not stop there: “Pretty soon it will be women preachers, social justice, then racism, then [critical race theory], then victimization because the world is a ball and chain, and when you’re hooked, it will take you to the bottom. They hate the truth.”

The CBN endorsed Voddie Baucham for the president of its Pastor’s Conference. Baucham is a staunch critic of Critical Race Theory and is the author of Fault Lines: The Social Justice Movement and Evangelicalism’s Looming Catastrophe. Bob Smietana of Religion News Service writes:

The presidency of the Southern Baptist Convention’s Pastors’ Conference carries little power, and the event itself, though it draws thousands of SBC pastors in the days ahead of the denomination’s annual meeting, is usually a low-key affair — a day and a half of preaching and singing. But this year’s election for Pastors’ Conference president, held Monday night (June 13), was hotly contested, as conservative Baptists have come to the annual meeting this year determined to halt what they see as a drift away from biblical principles in favor of woke-ism.

Baucham lost the election to Daniel Dickard, pastor of Friendly Avenue Baptist Church in Greensboro, North Carolina. But it was close, 690-608.

But wait–there were claims of voter fraud! Here is Smietana:

The vote was accompanied by controversy, as an initial round, in which pastors were asked to stand to show their preference, proved inconclusive, and the conference moved to a paper ballot. As the conference adjourned for dinner while ballots were counted, accusations of ballot stuffing and photos of nonpastors began circulating on social media. Fifty-nine votes were eventually disallowed.

“This would not have changed the results,” said Matt Henslee, the outgoing president.

The CBN is endorsing Tom Ascol for president of the Southern Baptist Convention. Ascol is actively campaigning for the position on Trump evangelical media. In the last week or so he has appeared on the Eric Metaxas Show, The Jenna Ellis Show, Chad Prather, Allie Beth Stuckey, One America News, and The Todd Starnes Show. Ascol’s daughter is even using a picture of him “sharing the Gospel” with a Hindu man in Anaheim to promote his candidacy. (Who takes a picture of someone sharing the Gospel and then puts it on Twitter to promote a candidate in a denominational election?).

In July 2019, Ascol said that Beth Moore, Russell Moore, and others were part of a conspiracy to bring social justice and women preachers into the Southern Baptist Convention.

The election will take place this afternoon.

In other convention news:

Brian Kaylor has some good coverage of the Conservative Baptist Network breakfast for this morning:

More tweets from the CBN breakfast:

Other interesting tweets (in no particular order):