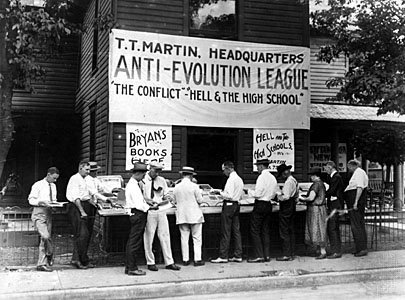 Over at Politico, historian Joshua Zeitz traces the roots of our school battles to the 1925 Scopes Trial.

At first glance, today’s school wars seem like a cut and dried case of modernity versus tradition, secularism versus religion, liberality versus conservatism. There’s the book banning, taking place in 86 school districts in 26 states, removing works by Judy Blume, the much-loved author of fiction for children and young adults, the late Toni Morrison, who won both the Pulitzer Prize and Nobel Prize for literature, and biographies of Rosa Parks, Martin Luther King Jr., Ruby Bridges, Nelson Mandela, Sonia Sotomayor, Neil deGrasse Tyson and Malala Yousafzai. There are the bills that ban the teaching of critical race theory, Florida’s so-called “Don’t Say Gay” law, and a raft of other proposals that would sharply restrict what teachers can say, and what students can read and learn, both in primary and secondary schools, as well as state-supported universities.

This phenomenon isn’t new. Public schools have been the focus of political energy for as long as they’ve existed in the United States — often acting as the staging ground for broader conflicts over race, sex and sexuality, religion and a host of other debates.

The most prominent example of school wars as proxy for political wars is the Scopes “monkey trial” of 1925, when John Scopes, an elementary school teacher in Tennessee, stood trial for violating the state’s legal ban on teaching evolution. The dramatic show trial embodied the contest between traditional religion, on the one hand, and empiricism and modernity, on the other. In many ways, it’s a fitting analogy for our own time.

But, dig deeper, and you’ll see the Scopes trial was also about more than religion and science, or tradition and modernity. It was about two very different conceptions of democratic freedom.

Should local communities enjoy the right to govern themselves and their institutions, including schools? That’s one definition of freedom.

Or do individuals enjoy certain inalienable rights, including the right to free speech and expression, that majorities can never restrict? That’s another.

The tension between majoritarian democracy and civil rights was very much at the heart of the Scopes trial, and it remains at the heart of our current politics — motivating conflicts over everything from whether the state can regulate access to medical care and contraception, to whether majorities can require business owners to serve LGBTQ customers. That tension does not break down along partisan lines. Both parties have struggled to articulate a consistent vision, in part because these two ideas of freedom can often exist in tension with each other, and yet each is embedded in America’s political culture.