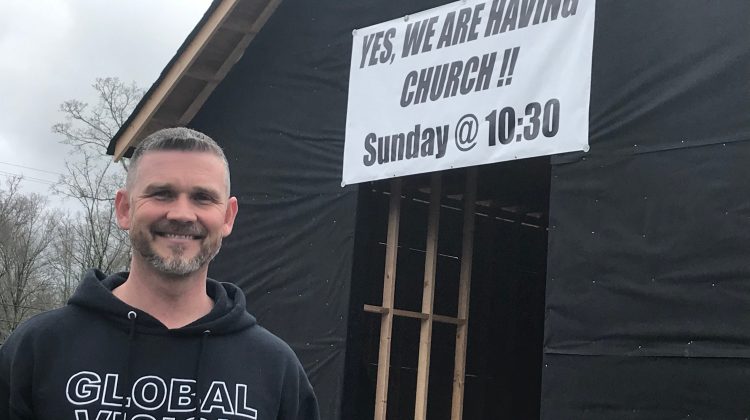 Some of you remember this from last week:

This is a clear violation of the Johnson Amendment of the United States tax code. Clergy are not permitted to endorse candidates and still keep the tax-exempt status of their churches. Americans United for the Separation of Church and State filed a complaint against Greg Locke to the Internal Revenue Service. Here is a summary of its argument:

Americans United for Separation of Church and State urged the IRS to investigate Tennessee pastor Greg Locke for violating federal law on Sunday when he repeatedly declared from the pulpit of his Global Vision Bible Church, “You cannot be a Christian and vote Democrat in this nation” and “If you vote Democrat, I don’t even want you around this church. You can get out.” Locke’s remarks violated the Johnson Amendment, a nearly 70-year-old federal law that prevents nonprofits, including houses of worship, from endorsing or opposing political parties or candidates.

During the tent revival sermon that was live-streamed online, Locke pointed at the camera and, to the cheers of the in-person audience, threatened, “You ain’t seen the insurrection yet. You keep on pushing our buttons, you low-down, sorry compromisers, you God-hating communists, maybe you’ll find out what an insurrection is.” Locke had preached to Donald Trump supporters in Washington, D.C., on the eve of the Jan. 6, 2021, attack on the U.S. Capitol and has prayed for and blessed members of the Proud Boys, a neo-fascist hate group that participated in the insurrection.

“Now, when our democracy is threatened by white Christian nationalism like never before, the IRS must investigate blatant Johnson Amendment violations like Locke’s remarks and enforce the federal law that protects the integrity of both our elections and our houses of worship by ensuring nonprofits don’t engage in partisan politics,” said Rachel Laser, president and CEO of Americans United. “Tax exemption is a privilege, not a constitutional right. The government has attached sensible strings to that privilege. This rule, which is broadly popular among religious and nonreligious Americans alike, ensures charitable donations meant for the common good are not spent on corrosive partisan politics.”

Americans United’s letter to the IRS is available here.

In Sunday’s sermon, Locke also references the lie that the 2020 presidential election was stolen from Donald Trump; casts doubt that a mass shooting in a predominantly Black neighborhood in Buffalo, N.Y., the day before was racially motivated; disparages LGBTQ people; randomly asserts that “Obama is behind all of” America’s current problems; and repeatedly warns of the threat of demons and witchcraft. Locke has also raged against COVID-19 precautions and held public book burnings, including taking a blowtorch to a book written by Andrew L. Seidel, AU VP of Strategic Communications.

“I ain’t playin’ your stupid games,” he continued. “I’m going to the Supreme Court this Tuesday at noon and I’m going to raise hell for the life of them babies. … Right in Joe Biden’s backyard. That sleepy old fool is going to bust hell wide open. … I’m sick of it. Everyone wanna talk about the insurrection? Mmmm. Let me tell you something: You ain’t seen the insurrection yet. You keep on pushing our buttons, you low-down, sorry compromisers, you God-hating communists, maybe you’ll find out what an insurrection is.”

Though he clearly told congregants to vote a certain way, Republicans weren’t spared Locke’s wrath either: “You need to be delivered from voting Democrat. I think in that list in mass deliverance I’m going to start putting ‘spirit of Democrat.’ Come out in Jesus’ name. By the way, that doesn’t mean that I’m a full-fledged Republican, either. They’re two heads of the same snake. My loyalty is not to a party, my loyalty is the Kingdom of God.”

And then this happened:

I don’t think I’ve ever seen a church do this before. We’ll see how it all unfolds.