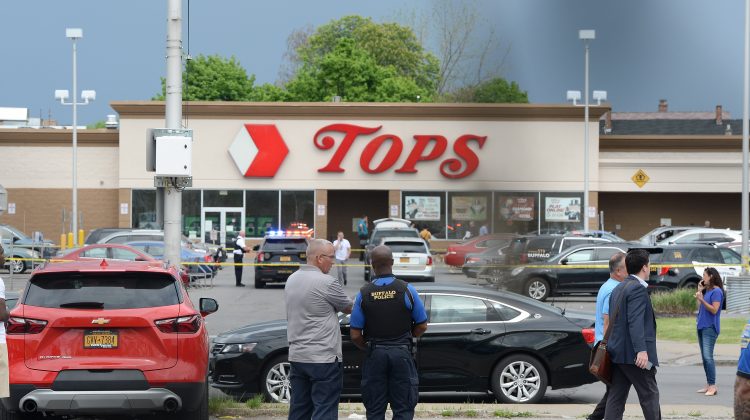 In the wake of the shootings in El Paso and in Dayton, Ohio, conservative evangelicals are offering many thoughts and prayers.

These mass shootings, they preach, reveal the moral degradation of our culture. Guns don’t kill people; sinners kill people. This is not a political problem; it is a problem of the soul.

Christian radio host Eric Metaxas, in a widely shared tweet, called for a spiritual revival to remedy a culture that has produced this spate of mass shootings.

Robert Jeffress, the pastor of First Baptist Dallas, reminded his followers that “laws … can never eliminate evil — only Christ can transform a person’s heart.”

Evangelist Franklin Graham said the “hate” that caused the mass shootings didn’t come from a gun; it comes from the heart.

These conservative pundits are correct. Future historians will inevitably see the rise of violent video games, toxic social media, unprecedented access to unhealthy material online and intense political partisanship as part of the context necessary for an accurate interpretation of these mass shootings.

But the same historians will also note the ugly renewal of white supremacy, nativism and racism. They will write about the destructive presidency of Donald Trump. And they will note the power of the NRA. We rarely hear conservative Christians talk about these details today.

Yes, Christians have a responsibility to pray for those suffering in the wake of these horrendous shootings in El Paso and Dayton. But appeals to thoughts, prayers and spiritual renewal can serve as an excuse for not doing anything practical about the gun problem that we face in America.

Historians will look back on this period and consider the widespread Christian nationalism of our time. Many American evangelicals believe that the United States was founded as a Christian nation and should continue to privilege Christianity over other religions. They seek to restore, renew or reclaim what they believe to be the Christian beliefs that guided the American founding.

For example, many American evangelicals, espousing Christian nationalist ideas, promote the idea that the Bill of Rights is a sacred document, ordained by God and informed by biblical principles. As a result, sensible reforms in the area of gun control pose a threat to what is affirmed in a document that, for many God-and-country patriots, carries a level of moral authority that is just one notch below the Bible.

“Let a thousand assault rifles bloom!” “It is our God-given right to have them!” “We are a Christian nation with a Christian constitution!”

What did Charlton Heston, the man who once played Moses, say about his “cold, dead hands?”

Many conservative evangelicals like to claim that our rights come from God. But does the Bible really affirm a “right” to bear military-style rifles? James Madison did not write the Second Amendment to reflect biblical teachings on self-defense. He wrote in the 18th-century context of a now-defunct colonial militia system.

Most conservative evangelicals would say that human life is valuable.

The idea that we are all created in the image of God — a belief that informs the antiabortion movement — has not gained much traction among conservative evangelicals when it comes to gun regulation. When babies are aborted, the Christian Right rarely talks about praying for the woman who had the abortion. They rarely offer “thoughts” to the families who suffer through such a decision. Instead, they attempt to solve the problem of abortion by passing legislation, organizing grass-roots campaigns, proposing new bills and electing political candidates who will appoint federal justices who share their interpretation of the Constitution and the Bill of Rights

More than 600,000 babies were aborted in 2015, according to the Centers for Disease Control and Prevention. What if evangelicals took the same approach in addressing this large number of abortions as they do with mass shootings? If they took such a route they would cease thinking creatively (and perhaps even legislatively) about this moral problem and simply retire to their prayer closets. Why take the fight for the dignity of human life to the public square when you can just ask God to send another Great Awakening?

As Christians we must pray for God’s presence in our lives and culture. May He heal our world and give us a glimpse of a coming kingdom defined by love, peace and justice. But American history teaches us that reform usually happens when Christians take action.

So let’s see how my thoughts from 2019 hold-up today. Here is how conservative evangelicals are responding on Twitter and Facebook to the white supremacy-motivated shooting that killed ten Black people this weekend in Buffalo:

The Liberty University Standing for Freedom Center doubles down by promoting/celebrating the overturning of a ban on semiautomatic weapons.

Reid is also posting about this pro-life event. Future historians are going have a field day with the fact that Christians are posting about defending life on the same day they are mum about a mass shooting:

Faith and Freedom Coalition: NOTHING

Lance Wallnau retweets this. Yup, it must be the left:

David Brody of the Christian Broadcasting Network: NOTHING. This guy chases after every story related to right-wing “victimhood” and has guests on to promote the “Big Lie” but he says nothing about the Buffalo shooting.

Samuel Rodriguez calls for thoughts and prayers and heart-change:

Jack Hibbs (Facebook): NOTHING. (But he is endorsing pro-gun political candidates).

Gary Bauer on Facebook: “Carol and I are praying for the good people of Buffalo, New York. Today’s horrific attack is evil. We need a revival.” But we apparently don’t need a revival to stop abortions. We need legislation or Supreme Court decisions for that.

Jack Graham: NOTHING (but a lot of stuff about baseball)

And this retweet from Shane:

David French retweets (this was also retweeted by Ed Stetzer):