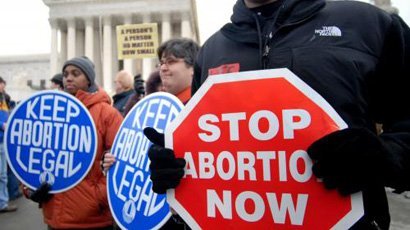 Michael Walther, a pro-life Catholic, can live with the consequences. But at least he is aware of them. Here is a taste of his piece at The New York Times:

American society as we know it today came into being during the 1970s, in the wake of Roe, amid rising crime rates, stagflation and the dismantling of the Fordist economic consensus in favor of deregulation and the breakup of stable, quasi-nationalized monopolies. It is not possible to conceive of our present way of life — the decline of heavy and textile manufacturing and the rise of the service economy, financialization, the collapse of traditional familial and other social structures, the subsuming of virtually every facet of our existence into digital technologies — in the absence of the estimated 63 million abortions that have been performed in America since 1973.

Exactly how abortion has affected the evolution of American society is a matter of some debate. Consider the economic implications. Twenty years ago, John D. Mueller argued in the pages of Family Policy, a conservative journal, that Roe was “perhaps the single largest American economic event of the past century, more significant than the Great Depression or the Second World War.” By reducing the size of the American population, he argued, abortion threatened both economic growth and innovation. Legal abortion, he said, had led to a reduction in living standards and trillions of dollars in lost net output.

In the years since the publication of Mr. Mueller’s essay, countless economists and social scientists have argued the opposite: that legal abortion is not only compatible with but also necessary for sustained economic growth. Among other things, reduced access to abortion is correlated with lower rates of labor force participation, reduced wages and increased job turnover.

If the actions of major corporations in states such as Texas, which recently banned abortion after about six weeks of pregnancy, are any indication, America’s business establishment agrees. The boards of corporations like Citigroup, with a fiduciary duty to their shareholders, have announced that they will subsidize travel for employees who seek out-of-state abortions.

Opponents of abortion should consider the possibility that these corporations are correct in their apparent assumption that abortion contributes to the maximization of shareholder value. Are we prepared to accept the converse proposition, to invite a reduction in shareholder value by banning abortion?