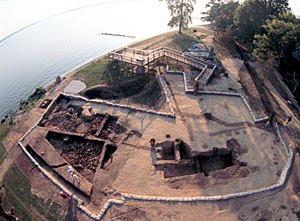 The National Trust for Historic Preservation just placed it on a list of the country’s most endangered places. Here is Michael Ruane at The Washington Post:

The dig site where archaeologist Sean Romo has just found the ancient fragment of armor is surrounded by a double layer of green sandbags to keep out water.

A dig site nearby is covered by a grate where a tarp can be quickly spread if it starts to rain.

And out in the James River, barges filled with stone are waiting to bolster the century-old concrete sea wall that is failing under the relentless pressure of the river.

The 400-year-old colonial site here is losing its battle with climate change, experts say, and Wednesday the National Trust for Historic Preservation placed it on a list of the country’s most endangered historical places.

“Jamestown is a world-class archaeological site and a place of national and international significance,” said James Horn, president of the Jamestown Rediscovery Foundation, the nonprofit that conducts archaeology and cares for the original settlement site. (The trust listing does not include the adjacent National Park Service Jamestown location.)

The threat to the site of one of the nation’s “very first cultural hubs … brings home the challenges that climate change pose to our entire society,” he said.

Katherine Malone-France, chief preservation officer for the trust, said, “You’ve got resources there underwater, that are staying underwater.”

“Jamestown demonstrates that the threats to our cultural resources from a changing climate are incredibly urgent,” she said. “We have a five-year window to make an impact. … This isn’t something that can wait 10 or 15 years.”

“This is our collective heritage,” she said Monday.