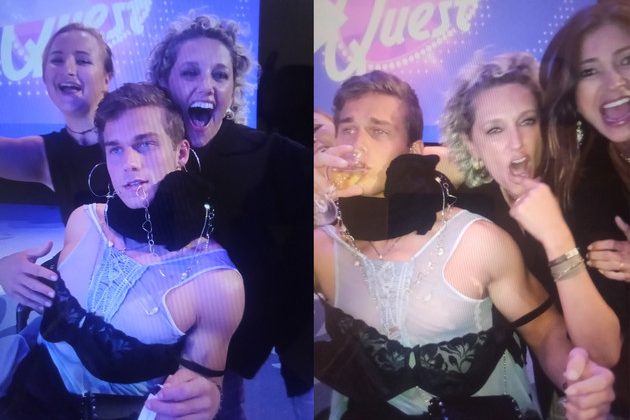 I will let Politico explain the latest in the ongoing saga of the Christian Right U.S. congressman from North Carolina. Here is a taste of Michael Kruse’s piece:

Cawthorn, 26, was raised in a conservative Baptist community in Henderson County, North Carolina, and has staked his political persona on arch-traditional Christian principles and the insistence of the importance of a kind of hypermasculinity. His comments about “the sexual perversion” in Washington made on a podcast, which he later admitted were exaggerated, drew the public disapproval and disavowal of Minority Leader Kevin McCarthy as well as other Republican leaders including those in his North Carolina congressional caucus.

After this story published, Cawthorn tweeted that the photos were taken of him during a game on a cruise before he was elected to Congress. “I guess the left thinks goofy vacation photos during a game on a cruise (taken waaay before I ran for Congress) is going to somehow hurt me? They’re running out of things to throw at me… Share your most embarrassing vacay pics in the replies.”

“I was raised on Proverbs and pushups,” Cawthorn said in a podcast in September 2020.

“I subscribe to Judeo-Christian beliefs,” he continued. “I have a personal relationship with Jesus Christ. I think if you think about my political ideology, where it really stems from, you know, my ethics and my morals and what I think is right and wrong, you look to ancient Jerusalem, you got ancient Judeo-Christian values. So right and wrong,” he continued. “I also cling to a lot of traditional values and a lot of traditional ideas, because they’ve worked in the past.”

“I think that we have bred a generation of soft men and that generation has created a lot of problems in our society and our culture,” he said in March 2021 on a podcast “designed to reclaim and restore masculinity in a society that is ever more dismissive of what it means to be a man.”

“There’s only one God and two genders,” he said in a tweet earlier this week.