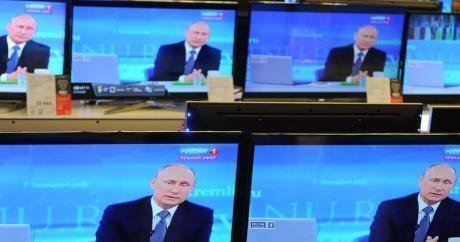 A lot of pro-Putin propaganda. Olga Khazan is watching so we don’t have to. Here is a taste of her recent piece at The Atlantic:

To get a sense of what Russians are told about the war, I fired up Russian state TV for a few hours a day over the past week from my laptop. Though the state-run news channels do include purportedly on-the-ground news reports, much of the action is on talk shows, which are “where the more extreme or nationalistic narratives are pushed,” Sarah Oates, a political-communication expert at the University of Maryland, told me.

Hosts and panelists stick closely to the same Kremlin talking points, lending the broadcasts an endless, looping quality, even by cable-TV standards. One panel of white guys who love Putin dissolves into another, and another. “Every third word is Ukraina, America, NATO,” says Bakhti Nishanov, a senior policy advisor at the U.S. Commission on Security and Cooperation in Europe. “Even if you were just not paying attention … it’s in your subconscious.”

On Russian TV sets, people, walls, and floors are decked out in the “Z” marking that Russian troops paint on their tanks. I saw it used to mean za pobedu (for “victory”) and za mir (for “peace”), even though that’s not how you write the letter Z in Russian. Throughout, I heard references to parts of Ukraine being “cleaned out” and “brought to order,” and that Ukrainians “will only understand the truth about their country once it’s liberated.” The penalty for dissent is great, and the talk-show guests are in constant agreement. They nevertheless frequently end up yelling, spitting twisty consonants at one another until the host introduces a new way in which the government line is correct.

On March 1, I tuned in to Perviy Kanal (Channel One), the most influential state-run channel, to find an on-the-ground report from Ukraine. It featured a woman saying in Russian, “We’ve been waiting for you for years”—as in, she’d been waiting for the Russians to invade. The reporter then interviewed Ukrainian fighters who’d supposedly given up their arms. The soldiers’ Russian captors were shown being sweet to them, giving them cigarettes and hot food and letting them call their moms. It’s impossible to know whether this was genuine or not; Russians might have been aping a viral video in which Ukrainian soldiers offered a captured Russian some tea and a phone call.