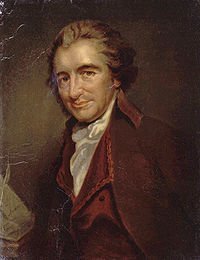 Historian Sean Griffin explores the legacy of Thomas Paine in early 19th-century New York. Here is a taste of his piece at the blog Gotham:

New York City has long been considered a hotbed of radical political ideas, as well as a cosmopolitan center of culture and commerce. But while the roots of the latter have been traced back to the city’s origins as a Dutch trading post with a decidedly commercial outlook and a polyglot population, fewer historians have explored the origins of the city’s radical political culture.

Indeed, what Eric Foner has termed an “American Radical Tradition” could be said in many ways to have originated in New York (although Philadelphia remains a strong contender). Most famously, Thomas Paine, the subject of one of Foner’s early works and the originator of what has been called the “Paineite radicalism” of the Anglo-Atlantic world, made the city his home between 1806 and his death in 1809.

By that time, Paine had been disowned by his former revolutionary colleagues in both the United States and France; the final indignity was suffered when his erstwhile political arch-enemy, the English polemicist William Cobbett, dug up Paine’s earthly remains and had them shipped to England, where they were later lost. But, as Seth Cotlar and others have shown, Paine’s influence did not end with his death; nor was it limited to the arguments for independence he outlined in Common Sense. Rather, it was the groundbreaking Rights of Man (1791–92) that became a touchstone for democratically-inclined radicals throughout the English-speaking world, leading one English admirer to conclude that “natural” rights (which for Paine included a right to education and basic economic security as well as rights of life, liberty, and property) applied to “the whole human race black or white, high or low, rich or poor.” As Cotlar shows, the Rights of Man prompted even relatively mainstream figures like Robert Coram and Joel Barlow to adopt more democratic ideas of republican government, along with the notion of a “social debt” owed by those who benefitted from inequalities of property and status. Paine’s Age of Reason (1794) inspired secular humanists and “free thought” radicals (while also prompting a backlash from those offended by its frank rejection of Christian dogma), and his Agrarian Justice (1797) influenced several generations of radical land reformers on both sides of the Atlantic, from Paine’s English contemporary Thomas Spence to the English transplant George Henry Evans of the New York-based National Reform Association in the 1840s and ’50s.

Perhaps no other city in the United States was more receptive than New York to what has been termed Paine’s “cosmopolitan internationalism,” the idea embodied by the Rights of Man’s proclamation that “my country is the world, and my religion is to do good.” In 1793, members of the New York General Society of Mechanics and Tradesmen first toasted Paine as a fellow “mechanic,” and beginning in 1825, workingmen revived Paine’s memory with annual celebrations of his birthday, a tradition that lasted well into the following decade. But perhaps Paine’s greatest legacy in New York lay not with the city’s “artisan republicans,” the workingmen who continued to host annual celebrations of his birthday into the 1830s, but with the transatlantic exiles from Britain, Ireland, and elsewhere, that made New York City their home after being persecuted by British authorities in the aftermath of the 1789 Revolution in France and throughout the period of the Napoleonic Wars. Members of the London Corresponding Society (LCS), perhaps the most working-class oriented of the various associations established in Britain to circulate radical and republican ideas, included Thomas Yarrow, who ended up in the New York area. Even before the physical arrival of such expatriate radicals in the United States, sailors and mariners had brought revolutionary news and radical tracts from Europe, and newspapers like Thomas Greenleaf’s New-York Journal carried notices about the LCS, the United Irishmen, and London’s Revolution Society, along with excerpts from Paine’s later works.