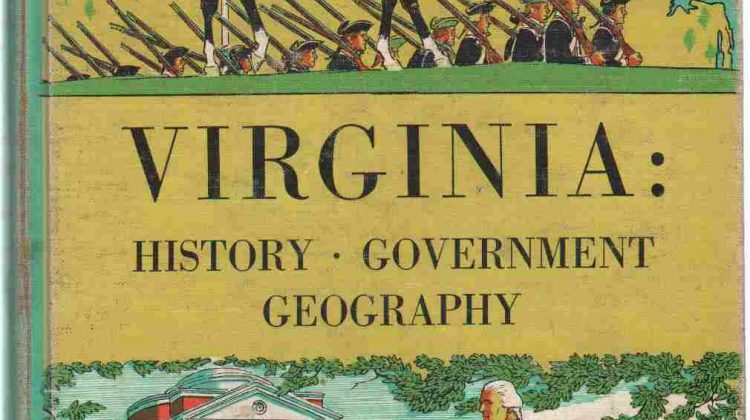 Washington Post writer Dana Milbank got his hands on a 7th grade Virginia history textbook used in the commonwealth’s public schools from the 1950s through the 1970s.

Virginia’s Glenn Youngkin opened a tip line so parents can report teachers mentioning anything “divisive.” The clear intent and likely effect of such actions: excise any reference to America’s racist past. Just in time for Black History Month!

So how would history sound denuded of anything potentially distressing for White kids? We don’t have to guess, because we’ve already been there. I have an actual 7th-grade textbook used in Virginia’s public schools from the 1950s through the 1970s — when Virginia began moving toward the current version of history: the truth.

I therefore present these verbatim excerpts from the textbook (“Virginia: History, Government, Geography” by Francis Butler Simkins and others), shared with me by Hamilton College historian Ty Seidule, author of “Robert E. Lee and Me: A Southerner’s Reckoning with the Myth of the Lost Cause.” Let’s call it “Glenn Youngkin’s No-Guilt History of Virginia for Fragile White People.”

“A feeling of strong affection existed between masters and slaves in a majority of Virginia homes. … It was to [the master’s] own interest to keep his slaves contented and in good health. If he treated them well, he could win their loyalty and cooperation. … The intelligent master found it profitable to discover and develop the talents and abilities of each slave. … The more progressive planters tried to promote loyalty and love of work by gifts and awards.”

“Many Negroes were taught to read and write. Many of them were allowed to meet in groups for preaching, for funerals, and for singing and dancing. They went visiting at night and sometimes owned guns. … Most of them were treated with kindness.”

“The tasks of each [house slave] were light. … They learned much about the finer things of life. The house servants took a great deal of pride in their comfortable positions. …The field hands … were given a rest period at noon, usually from one to three hours. Those who were too old or too sick to work in the fields were not forced to do so. … The ‘task system’ … gave them free hours after they finished their daily tasks. … The planter often kept a close eye upon [the overseer] to see that the slaves were not overworked or badly treated.”

“Each slave was given a weekly ration consisting of three or four pounds of pork and plenty of corn meal and molasses. To this food were added the vegetables, fruits, hogs and chickens which the slaves were allowed to raise for themselves. … When a slave was sick, tempting food was often carried to him from the master’s table. … At [Christmas,] extra rations and presents were given the slaves.”

“Male field hands received each year two summer suits, two winter suits, a straw hat, a wool hat, and two pairs of shoes. … Often the members of the master’s family would hand down to their favorite slaves clothing which they no longer needed. … [The slaves] loved finery.”

“Every effort was made to protect the health of the slaves. … It was the duty of all mistresses to give sick slaves the same care they gave their own children.”

“The house servants became almost as much a part of the planter’s family circle as its white members. … A strong tie existed between slave and master because each was dependent on the other. … The regard that master and slaves had for each other made plantation life happy and prosperous.”

“[The slaves] liked Virginia food, Virginia climate, and Virginia ways of living. Those Negroes who went to Liberia … were homesick. Many longed to get back to the plantations. … It must be remembered that Virginia was a home as much beloved by most of its Negroes as by its white people. Negroes did not wish to leave their old masters.”

“Life among the Negroes of Virginia in slavery times was generally happy. The Negroes went about in a cheerful manner making a living for themselves and for those for whom they worked. … They were not worried by the furious arguments going on between Northerners and Southerners over what should be done with them. … The negroes remained loyal to their white mistresses even after President Lincoln promised in his Emancipation Proclamation that the slaves would be freed.”

The negro slaves of the South are the happiest, and, in some sense, the freest people in the world. The children and the aged and infirm work not at all, and yet have all the comforts and necessaries of life provided for them. They enjoy liberty, because they are oppressed neither by care nor labor. The women do little hard work, and are protected from the despotism of their husbands by their masters. The negro men and stout boys work, on the average, in good weather, not more than nine hours a day. The balance of their time is spent in perfect abandon.