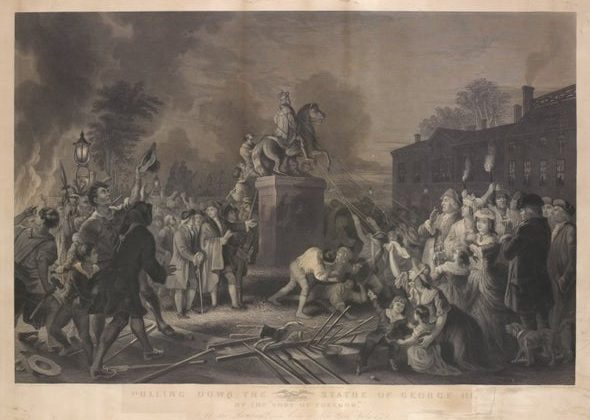 Wendy Bellion, an art historian at the University of Delaware, has an interesting piece at Smithsonian Magazine on the patriots’ toppling of this statue and a New York Historical Society exhibit on monuments.

A monument to iconoclasm might seem out of place today, but the suggestion was not altogether surprising for the late 19th and early 20th centuries. The Colonial Revival movement was enjoying its heyday at the time, and reenactments of the statue’s destruction occurred during several major commemorations of local and national history. In 1909, a papier-mâché reconstruction of the king’s statue appeared on a parade float in the Hudson-Fulton Celebration, a two-week program of events chronicling New York history. A photograph from the gathering shows a group of costumed men casually holding ropesattached to the monument, ready to tear it down from its plinth. Tens of thousands of attendees cheered the statue’s impending doom as the float traveled from the Upper West Side to Washington Square Park.

Decades later, in 1932, the statue came down all over again at the Waldorf Astoria Hotel. This time, the occasion was a society ball celebrating Washington’s 200th birthday. The highlight was an elaborate pageant called Old New York, organized by the costume designer for the Ziegfeld Follies. In the penultimate act of the show, performers charged at a model of the Bowling Green statue, raising huzzahs as it crashed to the floor of the ballroom.

Reenactors found new ways to revive the statue throughout the 20th century. In 1935, residents in Litchfield reenacted the melting of the statue—and even created souvenir bullets for posterity—to mark Connecticut’s tercentenary. In 1976, a bicentennial parade float in Wilton boasted an intact reproduction of the statue, but when it reached a low underpass at the high school, the head was conveniently taken off so the float could continue onward. (It won a prize for best in show.)

A striking fact emerges from this cultural history: The statue of George has enjoyed a much longer afterlife in American memory than the short time it spent atop its pedestal in Bowling Green. Why—despite enduring only in fragments, pictures and performances—has it exerted such remarkable staying power?

There is no single answer to this question. Over time, artists and actors helped make the statue’s toppling—just one of many destructive events of the American Revolution—into a compelling story about the origin of the of the United States. Like many monuments, the meanings attached to the history of the statue have also changed. Colonial Revival performers reinforced their own familial ties to the revolutionary era, celebrating the statue’s fall as a patriotic necessity in the pageants and parades of the early 20th century. Today, the statue’s reappearance—in interactive videos and even as a full-size reconstruction—in museums that are telling more inclusive histories of the Revolution suggests that it holds new lessons for contemporary audiences.