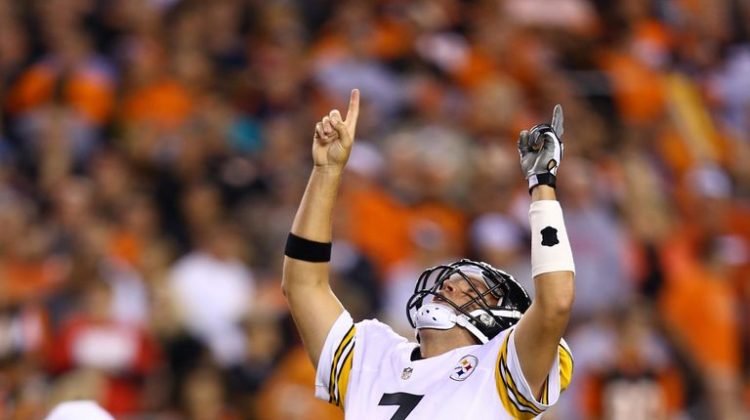 I grew up a Miami Dolphins fan. (How a kid raised in the New York metropolitan area became a Dolphins fan is a long story, but there are a lot of us out there.) I thus despised the Steelers. As a kid I always rooted against Mean Joe Greene (despite the Coke commercial), Terry Bradshaw, Lynn Swann, Franco Harris, Jack Lambert, and the rest. I hated the fact that the 1970s Steelers displaced the Dolphins as the pride of the American Football Conference.

My Dolphins fandom waned when Don Shula (1995) and then Dan Marino (2000) retired. In 2002 I moved to central Pennsylvania and was forced, thanks to regional television coverage of the NFL, to watch Steelers football every weekend. I became a fan. I am pulling for the Steelers tomorrow in their playoff game against the Chiefs. One of the reasons I hope they win is so quarterback Ben Roethlisberger’s career can be extended another game.

I love how Big Ben plays football, but let’s face it, he has never been a paragon of virtue off the field. His decision to ride his motorcycle without a helmet was stupid, and it almost cost him his life in 2006. The 2009 Lake Tahoe incident was a disgrace. We will never know what happened between Roethlisberger and Sarah McNulty in that hotel room, but I am inclined to believe McNulty’s account.

Shortly before the Lake Tahoe story broke, my wife and I bought a Roethlisberger jersey for my seven-year-old daughter. Her friends were Steelers fans and she begged us to get her one. She did not understand everything that happened in the sexual assault case (and we, of course, did not go into details), but when we explained to her that Roethlisberger had behaved badly, she decided to discard the jersey. Today, as a young feminist, she takes a great deal of pride in that decision.

But when taken as a whole, Roethlisberger’s adult life and career is much more complex. Shortly after the Milledgeville scandal, Roethlisberger got married and reconnected with his Christian faith. He and his wife Ashley started attending church at Christ Church at Grove Farm in Ohio Township, Pennsylvania. It is a “non-denominational church with roots in the Anglican Tradition.” Earlier this year Mark Helsel, Big Ben’s former pastor at Christ Church, wrote this on his Facebook page;

Today is a very unique day in Pittsburgh sports history. It is the last Home game for Ben Roethlisberger who is a sure future Hall of Famer. So I thought I would tell you a unique Ben story. I have many but this one means a lot. A story I have never shared in public before. Many of you know that Ben attended the service that I led at Christ Church. It was there that we met in the Spring of 2010. We got to know each other over a few lunches, talking after church, phone calls, emails, etc. That spring and summer Ben was at church every Sunday and would often text me or email me something encouraging after the service about the message. During this time there would be people who would approach me who were skeptical about Ben’s attendance, and would tell me it was all a PR move, or that he was rehabilitating his image, etc. To be honest, how would anyone know if that was true or not. So there was that question in the back of my mind, was this “change” all fake. So the Sunday before training camp was to start Ben came up to me after service and said, “Mark, I won’t be here next week, because of camp. Give me a call and I will get you passes to come on the field at training camp.” Ok cool. So the next Sunday rolls around and I am standing in the back of the sanctuary at 11:15 service, the service has begun, lights are down and I am watching the worship band when I get this friendly push from behind. I turn around and it is Ben and he says, “Hey, I made it to church” and he sits down in the back row by himself. So what he did was get up in Latrobe, during camp, drive an hour and 20 minutes to get to church, attend the service and then drive an hour and 20 minutes back in order to make the early afternoon practice at 2pm. Nobody knew that, no news media, no one. He had nothing to gain publicly by doing that and no one but him and I knew he was there that Sunday. That is when I knew everything he was doing was real. He was changing. He isn’t perfect but neither am I. He needs grace just like you and me. He just has more people watching him. And when no one was watching he was striving to do what was right.

I am sure that scholars and skeptics will parse every jot and tittle of Roethlisberger’s testimony here. I am guessing that the defenders of his victims will cringe when they watch this. Others will take their shots at men’s conferences like Man-Up Pittsburgh or the culture of masculinity that pervades evangelical athletic culture. I am sympathetic to some of this critique. Frankly, I wish Roethlisberger would offer a public apology for his past behavior. (Perhaps he has already done so and I missed it). Repentance requires confronting the past in all its fullness. I am hoping such words will come very soon from Roethlisberger.

If the possibility for redemption does not exist, what hope do we have?