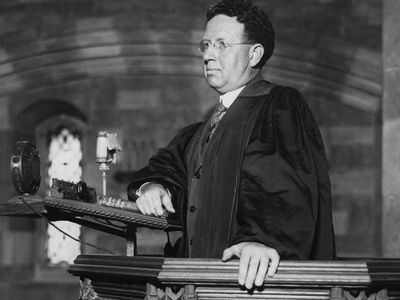 Here is a taste of his post at The Anxious Bench:

Now that we have reached the centennial anniversary of this sermon, perhaps it’s time to ask the question: Did the fundamentalists win?  The answer is not as clear as anyone would have likely expected at the time.

Nor did the anti-evolution forces make much headway in the North.  Although several southern states passed laws in the 1920s restricting the teaching of evolution, no state north of the Mason-Dixon line did so.  And even if high school biology textbooks across the nation minimized their presentation of evolutionary theory in deference to southern preferences from the 1930s until the early 1960s, college classrooms – with only a few fundamentalist exceptions – taught evolution as accepted fact, and many college-educated Protestants in the North may have assumed that the controversy was more-or-less over.  “The anti-evolutionists won the Scopes trial; yet, in a more important sense, they were defeated, overwhelmed by the tide of cosmopolitanism,” the historian William Leuchtenburg wrote in 1958 in his historical survey of the United States in the 1920s.  “Ostensibly successful on every front, the political fundamentalists in the 1920s were making a last stand in a lost cause.”

But in the last half-century, the answer to Fosdick’s question “Shall the fundamentalists win?” could quite plausibly be answered in the affirmative.  In the late twentieth century, a politically resurgent conservative evangelicalism gained national political influence and replaced a numerically declining mainline Protestantism as the public representation of Protestant Christianity in much of the media.  Conservative evangelicals revived the political fights over how human origins were taught in public schools, as well as over what was taught in seminaries.  It might have been too late to reclaim Princeton Theological Seminary – let alone the University of Chicago Divinity School – but the conservative evangelicals of the late twentieth century made a successful bid to purge the evolutionists and advocates of historical criticism from places such as Southern Baptist Theological Seminary and capture control of much of divinity training in the United States.  And when a Gallup Poll asked Americans in 1983 whether they believed that God had directly created human beings in their present form (as opposed to a divinely guided evolutionary process or an unguided evolution that occurred without divine involvement, which were the two other choices in the survey), a plurality of 44 percent said that indeed, God had directly created humans in their present form, as young-earth creationists insisted.  Perhaps the anti-evolutionists had not been quite as defeated as Leuchtenburg assumed.