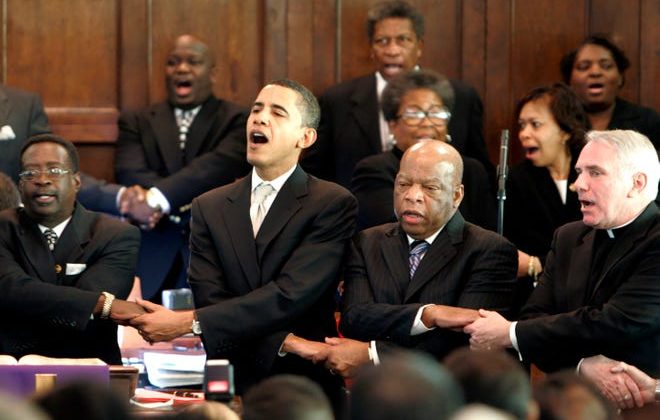 Here is Obama at USA Today:

When I spoke at John Lewis’ memorial service two years ago, I emphasized a truth John knew better than just about anyone. Our democracy isn’t a given. It isn’t self-executing. We, as citizens, have to nurture and tend it. We have to work at it. And in that task, we have to vigilantly preserve and protect our most basic tool of self-government, which is the right to vote.

At the time, various state legislators across the country had already passed a variety of laws designed to make voting harder. It was an attack on everything John Lewis fought for, and a challenge to our most fundamental democratic freedoms.

Since then, things have only gotten worse.

While the American people turned out to vote at the highest rate in a century in the last presidential election, members of one of our two major political parties – spurred on by the then-sitting president – denied the results of that election and spun conspiracy theories that drove a violent mob to attack our Capitol.

Although initially rejected by many Republicans, those claims continued to be amplified by conservative media outlets, and have since been embraced by a sizable portion of Republican voters – not to mention GOP elected officials who do, or at least should, know better. Those Republican officials and conservative thought leaders who have courageously stood their ground and rejected such anti-democratic efforts have found themselves ostracized, threatened and subjected to primary challenges.

Meanwhile, state legislators in 49 states have introduced more than 400 bills designed to suppress votes. Some of these bills we’ve seen before: legislation that would discourage voters, including racial minorities, low-income voters and young people from casting a ballot. Others aim to treat certain polling locations differently, creating one set of rules for voters living in cities and another set for people living in more conservative, rural areas.

We’re also seeing more aggressive attempts to gerrymander congressional districts. Gerrymandering, which essentially allows politicians to choose their voters instead of the other way around, isn’t new – and both parties have engaged in it.

But what we’re seeing now are far more aggressive and precise efforts on the part of Republican state legislatures to tilt the playing field in their favor. In states that have approved new congressional maps, there are now 15 fewer competitive districts than there were before. Fewer competitive districts increases partisanship, since candidates who only have to appeal to primary voters have no incentive to compromise or move to the center.