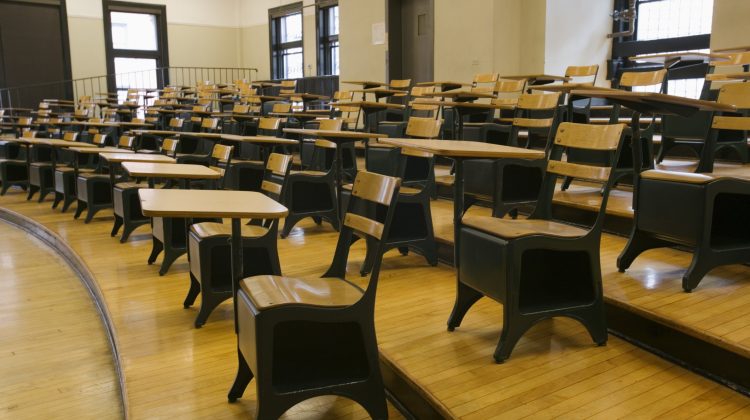 Here is Jonathan Zimmerman at Liberties:

In 1925, student delegates from twenty colleges met at Wesleyan University to discuss a growing concern on America’s campuses: the poor quality of teaching. They decried dry-as-dust professors who filled up blackboards with irrelevant facts while students doodled, read novels, or dozed off. At larger schools, “section men” — soon to be known as teaching assistants — led aimless discussions or simply lectured, in a dull imitation of their elders. What was the point of going to college, the students assembled at Wesleyan asked, if you didn’t learn anything in class? “It is not that college boys have ceased to have a good time on the campus,” wrote a correspondent from the Boston Globe, one of several national newspapers that covered the conference. “It is rather that an increasing proportion of them are wondering what college is all about and why they are there.” The keynote address was delivered by James Harvey Robinson, a historian and one of the founders of the New School for Social Research, who dismissed most college teachers as “insufferable bores.” He urged the students to “stand up and kick” against poor instruction, because “college belongs to them.”

Belongs, indeed. In a higher education system financed mostly by tuition dollars, the customer is king. Colleges and universities have become full-service lifestyle stations, competing for students and catering to their every material need. Become your best self, the brochures proclaim; find the real you. But if you look at the pictures, you will see that everyone is somehow finding their best selves in really nice gyms, dormitories, and dining halls. Of course, there is enormous variation across our 4,700 degree-granting institutions; almost half of the student population attend community colleges, for example, which are almost never residential. But every school must fill the coffers and balance the books. And the best way to do that is to advertise “the experience” — that is, the fun you will have in those beautifully appointed spaces — or the opportunities they will provide to you down the road.

I, too, had a lot of fun in college, which opened doors to the Peace Corps, high school teaching, graduate school, and the professoriate. Yet it also opened my mind to strenuously different ways of seeing the world. Surely, college should be about something more than a four-year party that sets you up for a decent-paying job; it should improve the way you think, by exposing you to rigorous and imaginative instruction in the classroom. That is what the students who gathered at Wesleyan a century ago agitated for, and I think they were right.

It is hard to find that dissident spirit on our campuses right now. To be sure, students “stand up and kick” — to quote Robinson — about a wide range of issues, especially those related to race. Over the past five years, they have demanded compulsory diversity training for faculty, multicultural centers for minority students, limits on campus police, and much else. But they have not demanded better teaching. During the recent pandemic, students at dozens of schools petitioned for tuition discounts on the altogether reasonable grounds that Zoom classes were not as good as the regular kind. But there was no organized protest to improve virtual instruction or to replace it with in-person classes once that became possible. My own university invited students back to campus last spring but continued to teach them virtually. And most of the students seemed fine — or more than fine — with that. They got the college experience, albeit a socially distanced one. And they could take classes in their pajamas, interrupted only when their Wi-Fi went down or when their tech-challenged professors hit the wrong button.

I did the best I could, teaching all those faces in all those boxes, but it was not good enough. As a wide swath of surveys confirmed, students thought they were learning less in online classes than in face-to-face ones. That was especially true for low-income and first-generation students, who more often lacked reliable internet connectivity or a quiet place to work. To their credit, some institutions provided grants and other kinds of emergency assistance to these students. But the worries over “equity” were not matched by a broader concern about the overall quality of education that our institutions were delivering to everybody. Our campuses get riled up whenever someone alleges that a certain group does not have equal access to the educational goods of the university. But whether the university itself is good at educating does not seem to exercise us at all. “Nothing can straighten out the college question except good teaching,” declared a student leader in 1924 at Dartmouth, one of dozens of schools to witness protests over poor instruction. “Everything else is besides the point.” Today, college teaching is mostly besides the point. Almost nobody stands up and kicks about it; instead we sit on our hands.