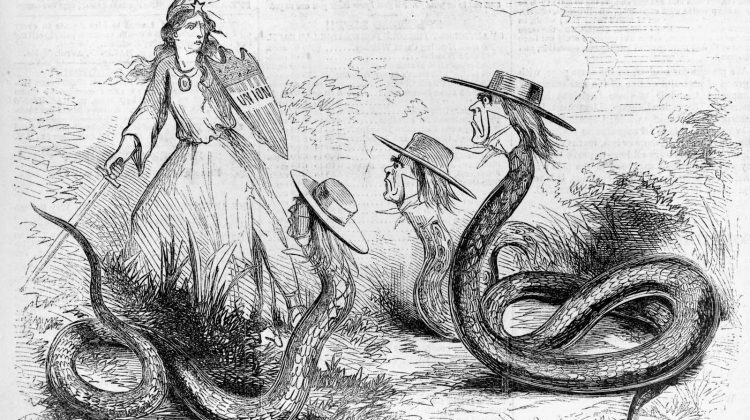 The first official Thanksgiving in the United States did not take place in 1621. (How could it? There was no United States in 1621). It happened in 1863 when Abraham Lincoln, on October 3, proclaimed that Thursday, November 26 would be a day for Americans to thank God for “the blessings of fruitful fields and healthful skies.” The United States was in the midst of a Civil War and Lincoln’s proclamation asked God to “heal the wounds of the nation and…restore it as soon as may be consistent with the Divine purposes to the full enjoyment of peace, harmony, tranquility and Union.”

Here is Joshua Zeitz at Politico:

For years, many Southerners and pro-slavery Northerners had pilloried the Republican Party as an organization of religious fanatics bound by a commitment to extreme and even (for the time) zany evangelical reform movements — in the words of Sen. Stephen Douglas of Illinois, “the black republican army is an allied army, composed of Know Nothings, Abolitionists, Free Soilers, Maine Liquor Law men, woman’s rights men, Anti-renters, Anti-Masons, and all the isms that have been sloughed off from all the honest parties in the country.” While some of these movements strike the modern reader as incongruous, in the antebellum era, some of the strongest advocates of abolition and women’s rights also wanted to restrict immigration and impose sobriety on a nation of heavy drinkers. Race — the debate over slavery and abolition — was always at the center of the political debate. But it intersected with a broader array of cultural concerns.

In the same way that some Americans today lump their cultural resentments under the banner of “wokeness,” many conservatives in Lincoln’s day decried the Republican Party’s affinity for “isms” — “an abolition conglomerate of all the isms at war with the rights of the States,” “all the isms … combined in the superlative ism, which I denounce as demonism, ” as Gov. Henry Wise of Virginia stated the case. George Fitzhugh, a leading Southern polemicist before the war, echoed Douglas when he denounced the “Bloomers and Women’s Rights men,” the “I vote myself a farm men,” the “Millerites, and Spiritual Rappers, and Shakers, and Widow Wakemanites, and Agrarians, and Grahamites, and a thousand other superstitious and infidel isms.”

While most Americans in Lincoln’s time identified as evangelical Christians, and while the ranks of War Democrats included many evangelicals, the churches were closely associated with many of the reform movements — including abolitionism — that Democrats so sharply opposed. Particularly in the Midwest, many Democrats resented the increasingly partisan tone that “political priests” assumed in their Sunday sermons and, as one newspaper editor wrote, the “fanatics [who] have assumed the cloak of religion to carry out schemes entirely at variance with the Almighty’s commandments.”

It became increasingly popular for administration critics to lump the offending religious reform movements under the moniker of “Puritanism,” given the central role that New England played in organized abolitionism. It made little difference that Puritanism bore nothing in common with evangelical Christianity, either intellectually or theologically. By 1863, the term had become a political descriptor, devoid of its original meaning. The Republican Party, as one Confederate political cartoonist portrayed it, was built on the foundation of “PURITANISM,” supported by pillars that included “WITCH BURNING,” “SOCIALISM,” “FREE LOVE,” “SPIRIT RAPPING,” “RATIONALISM” and “NEGRO WORSHIP.”

Puritanism, said influential Peace Democrats like Clement Vallandigham and Samuel Cox, was the origin of all the “isms” that had propelled America to war. Shortly before his Thanksgiving proclamation, Lincoln received a letter from Indiana’s beleaguered Republican governor, who reported that “every democratic newspaper … is teeming with abuse of New England and it is the theme of every speech. … They allege New England has brought upon us, the War, by a fanatical crusade against Slavery.”

Little wonder, then, that many Democrats resented the spirit of Lincoln’s proclamation, to say nothing of their ministers’ Thanksgiving sermons the following Sunday morning. Many Democratic newspapers, like the York Gazette in Pennsylvania, scarcely mentioned the holiday, noting simply that shops would be closed, and instead devoted column space to fulminations against political preachers who stoked anti-Southern passions and promoted endless war against the South. Further west, the Indianapolis Star railed against the administration’s “Puritan abolition game” to “protract the war till the period of another Presidential election is passed, to be decided not by the people, but by the army.”