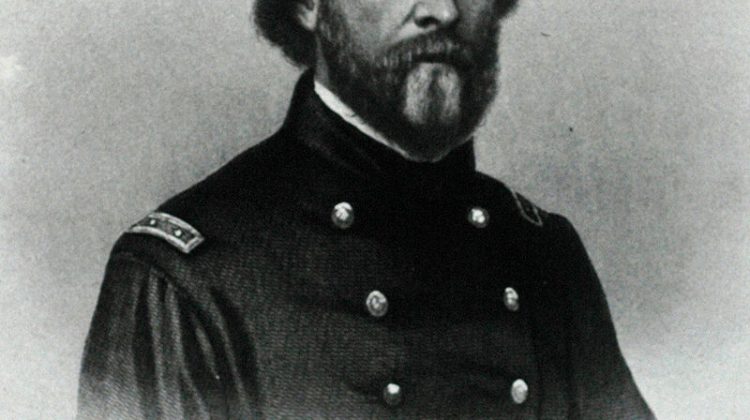 If you have watched the Ken Burns documentary The Civil War you might remember Sullivan Ballou. The Union officer stole the show with the letter he wrote to his wife Sarah a week before he was killed at the First Battle of Bull Run.

Over at Common-Place, historian James Broomall tells the story of Sullivan Ballou’s body:

Ballou’s body, buried in late July 1861 at Sudley Church near the Bull Run battlefield, did not rest in peace. Sometime after the battle, rebel soldiers dug up the remains of United States troops. According to local Blacks who witnessed the scene, the Confederates first searched for buttons as souvenirs. Their work then turned far more macabre. They started collecting bones. One soldier proclaimed that he intended to use a skull as a “drinking-cup on the occasion of his marriage.” Bull Run initiated many a soldier into the bloody world of combat. Horrified and exhilarated by the encounter, they transferred their mixed emotions into the collection of objects with violent histories. However terrible these acts, Sullivan Ballou suffered a worse fate: Confederates disinterred, beheaded, and then burned his corpse.

Ken Burns never related the fate of Sullivan Ballou’s body. To do so would have spotlighted an uncomfortable part of Civil War history marked by violence and brutality. Perhaps the master documentarian should not be faulted. The incident, well-publicized during the war years, has largely been forgotten. Simon Harrison, one of the few scholars who has written about the collection of bones in war, maintains that the “Confederate soldiers and their supporters who collected Northern skulls did so because their political interests were predicated on representing Southerners and Northerners as two different peoples.” Harrison’s argument is convincing. But the incident also speaks to a broader cultural shift. The existential crisis of civil war challenged, though never overturned, the nineteenth-century’s prevailing culture of romanticism. Soldiers’ reports from the front, citizens’ encounters with the aftermath of battle, and the circulation of objects with violent histories created narratives of war that were marked departures from conventional accounts of war grounded in heroism and glory. Only by placing Ballou’s sentimentalist letter in tension with his dismembered body can Civil War Americans’ layered discourse be fully revealed.

It is worth pausing here, though, to note that the removal and display of human remains intersects with a long history. On the one hand, white Americans, and their English forebears, had a history of taking and displaying skulls as acts of domination. New Englanders affixed the head of Philip, a Wampanoag leader, on a post outside Plymouth, Massachusetts, in 1676. And in 1838, Dr. Frederick Weedon took the personal effects of the Seminole warrior Osceola and then removed his head. At different points in the American South, enslavers displayed Blacks’ heads as warnings against resistance. On the other hand, Europeans and Americans had long kept bones as relics or artifacts of curiosity. Beginning around 1200, the new Gothic architectural style within European churches accorded privileged spaces for the body parts of saints. Holy relics and human remains were essential parts of religious life. Much later, during the Revolutionary era, avowed Loyalist David Redding was caught trying to steal muskets at Bennington, Vermont. He was executed for the crime in 1778. A local resident, Dr. Jonas Fay, collected the body and preserved the skeleton. After being conveyed to another family, the bones ended up back in Bennington at the Historical Museum before eventual reburial. Thomas Paine’s skeleton suffered a similar fate. Disinterred from an American burial plot, the bones ended up in England. They were distributed among different people, some lost or destroyed, others collected and displayed.

Confederates’ quest for bones thus connects to a bizarre history of the use, and misuse, of human remains. Bones from the Bull Run battlefield were taken as acts of domination and displayed as trophies of war. However macabre, human remains became part of the deeply variegated material culture of war. The gravity of civil war and the conditions it generated resulted in “a massive traffic in objects,” as historian Joan Cashin observes, “prompting the redistribution of millions” of objects of war. Bayonets and bullets, fragments from famous trees and notable buildings, articles of clothing and military accoutrements all featured prominently. Human skulls were another matter entirely.