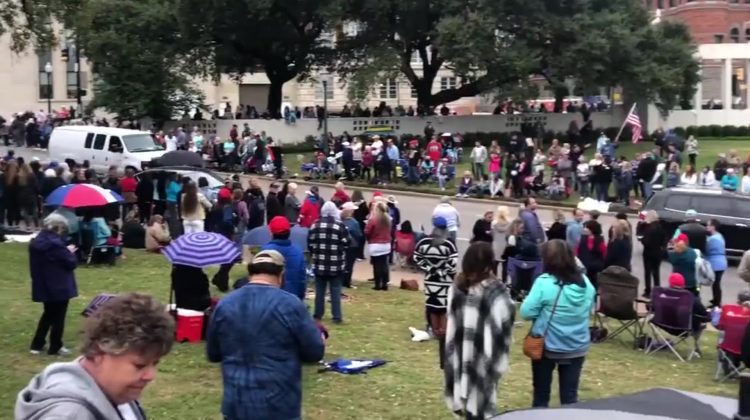 Yes, stuff like this actually happens in the United States of America these days.

Yesterday hundreds of QAnon supporters gathered in Dallas at the site of John F. Kennedy’s assassination because they believed that John F. Kennedy Jr. would appear and announce the reinstatement of Donald Trump as president.

Here is a taste of Alex Macon’s reporting at Dallas Magazine:

So on a drizzly Tuesday, a couple hundred adherents and fellow travelers of QAnon, some curious downtown office workers, and a few reporters head to the site where John F. Kennedy was killed on Nov. 22, 1963. Freelance journalist Steven Monacelli, who ran into a QAnon crowd downtown last night, says on Twitter that a popular Q theory maintains that John F. Kennedy Jr., who died in a plane crash in 1999, is expected to make an announcement by the grassy knoll.

The handful of folks I talk to by the grassy knoll a little after 12:30 p.m. Tuesday are less specific about what they’re expecting. They’re waving Trump flags and American flags. I see a few campaign-style posters advertising a Trump-Kennedy ticket. A man is selling bottled water and rain ponchos. Everybody is waiting on something.

“What we’re learning is that JFK, when he was shot here, he was the second coming of Jesus Christ, and he was resurrected four days later, and he’s been living in witness protection as well as his son and more than 900 others. And this is the route that he took, but now it’s going to be the route that he’ll finish” says a woman carrying a sign with a QAnon slogan. She declines to give her name, but says she is visiting Dallas from Florida.

A man holding an American flag, who also came from Florida, tells me that “Trump’s the chosen one.”

A few other people who are mistrustful of the media decline to speak to me.

Wendy Launius and Alex Trujilla say they drove up from League City, outside of Houston. They’re excited to join the “movement that’s happening right now. It’s history in the making.”

They’re not necessarily QAnon adherents, but describe themselves as Trump supporters who are dismayed by what they said was a rigged presidential election and the leadership of President Joe Biden. They heard about this gathering on the messaging app Telegram. “Not everybody can be wrong,” Trujilla says. “Something’s going to happen.”

What are they expecting to see today?

“We have no idea. We’re just here on faith. Believing.”