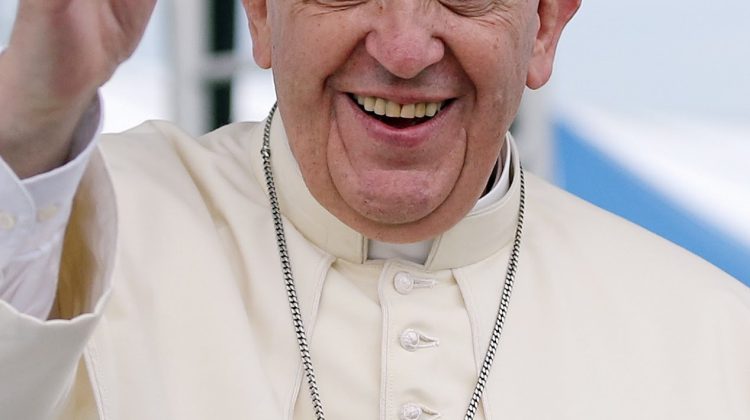 Here is a taste of the text of the Pope’s latest video message “for the popular movements”:

This is what I like to call you: social poets. You are social poets, because you have the ability and the courage to create hope where there appears to be only waste and exclusion. Poetry means creativity, and you create hope. With your hands you know how to shape the dignity of each person, of families and of society as a whole, with land, housing, work, care, and community. Thank you, because your dedication speaks with an authority that can refute the silent and often polite denials to which you have been subjected, or to which so many of our brothers and sisters are subjected. But, thinking of you, I am convinced that your dedication is above all a proclamation of hope. Seeing you reminds me that we are not condemned to repeat or to build a future based on exclusion and inequality, rejection or indifference; where the culture of privilege is an invisible and insurmountable power; and where being exploited and abused are common methods of survival. No! You know how to proclaim this very well. Thank you...

In these months, many things you’ve long been denouncing have become totally obvious. The pandemic has laid bare the social inequalities that afflict our peoples. Seeking neither permission nor forgiveness, it has exposed the heart-breaking situation of so many brothers and sisters, the situation that so many post-truth mechanisms have been unable to conceal.

Many things we used to take for granted have collapsed like a house of cards. We have experienced how our way of life can drastically change from one day to the next, preventing us, for example, from seeing our relatives, colleagues and friends. In many countries, governments reacted. They listened to the science and were able to impose limits to ensure the common good, and so they managed at least for a while to put the brakes on this “gigantic machine” that works almost automatically, in which peoples and persons are simply cogs.

We have all suffered the pain of lockdown, but as usual you have had the worst of it. In neighbourhoods without basic infrastructure, where many of you and millions and millions more people live, it is difficult to stay at home, not only because you do not have everything you need to ensure minimum care and protection measures, but also because your home is the neighbourhood. Migrants, undocumented persons, informal workers without a fixed income were deprived, in many cases, of any state aid and prevented from carrying out their usual tasks, thus exacerbating their already grinding poverty. One of the expressions of this culture of indifference is that this suffering one-third of our world does not seem to be of sufficient interest to the big media and opinion makers. It remains huddled together and hidden.…

You are, as I said in the letter I sent you last year, a veritable invisible army; you are a fundamental part of that humanity that fights for life against a system of death. In this engagement I see the Lord who makes Himself present in our midst, to give to us His Kingdom as a gift. When He offered us the standard by which we will be judged (cf. Mt 25: 31-46), Jesus told us that salvation consists in taking care of the hungry, the sick, prisoners, foreigners; in short, in recognising Him and serving Him in all suffering humanity. That is why I wish to say to you: “Blessed are those who hunger and thirst for justice, for they shall be satisfied” (Mt 5: 6), “Blessed are the peacemakers, for they shall be called children of God” (Mt 5: 9). We want this beatitude to expand, to permeate and anoint every corner and every space where life is threatened. But it happens to us as people, as communities, as families and even individually, that we have to face situations that paralyse us, where the horizon disappears and bewilderment, fear, powerlessness and injustice seem to take over the present. We also experience resistance to the changes we need and long for, many forms of resistance that run deep, that are rooted beyond our strength and decisions. They are what the Social Teaching of the Church calls structures of sin; these too we are called to change, and we cannot overlook them in the moment of thinking of how to act. Personal change is necessary, but it is also indispensable to adjust our socio-economic models so that they have a human face, because many models have lost it. And thinking about these situations, I make a pest of myself with my questions. And I go on asking. And I ask everyone in the name of God.

I ask all the great pharmaceutical laboratories to release the patents. Make a gesture of humanity and allow every country, every people, every human being, to have access to the vaccines. There are countries where only three or four per cent of the inhabitants have been vaccinated.

In the name of God, I ask financial groups and international credit institutions to allow poor countries to assure “the basic needs of their people” and to cancel those debts that so often are contracted against the interests of those same peoples.

In the name of God, I ask the great extractive industries — mining, oil, forestry, real estate, agribusiness — to stop destroying forests, wetlands and mountains, to stop polluting rivers and seas, to stop poisoning food and people.

In the name of God, I ask the great food corporations to stop imposing monopolistic systems of production and distribution that inflate prices and end up withholding bread from the hungry.

In the name of God, I ask arms manufacturers and dealers to completely stop their activity, because it foments violence and war, it contributes to those awful geopolitical games which cost millions of lives displaced and millions dead.

In the name of God, I ask the technology giants to stop exploiting human weakness, people’s vulnerability, for the sake of profits without caring about the spread of hate speech, grooming, fake news, conspiracy theories, and political manipulation.

In the name of God, I ask the telecommunications giants to ease access to educational material and connectivity for teachers via the internet so that poor children can be educated even under quarantine.

In the name of God, I ask the media to stop the logic of post-truth, disinformation, defamation, slander and the unhealthy attraction to dirt and scandal, and to contribute to human fraternity and empathy with those who are most deeply damaged.

In the name of God, I call on powerful countries to stop aggression, blockades and unilateral sanctions against any country anywhere on earth. No to neo-colonialism. Conflicts must be resolved in multilateral fora such as the United Nations. We have already seen how unilateral interventions, invasions and occupations end up; even if they are justified by noble motives and fine words.

This system, with its relentless logic of profit, is escaping all human control. It is time to slow the locomotive down, an out-of-control locomotive hurtling towards the abyss. There is still time.

Together with the poor of the earth, I wish to ask governments in general, politicians of all parties, to represent their people and to work for the common good. I want to ask them for the courage to look at their own people, to look people in the eye, and the courage to know that the good of a people is much more than a consensus between parties (cf. Evangelii gaudium, 218). Let them stop listening exclusively to the economic elites, who so often spout superficial ideologies that ignore humanity’s real dilemmas. May they be servants of the people who demand land, work, housing and good living. This aboriginal good living or buen vivir is not the same as “la dolce vita” or “sweet idleness”, no. This is good human living that puts us in harmony with all humanity, with all creation…

But what is one of the greatest dangers we face today? In the course of my life – I am not a teenager, I know, I do have some experience – I have managed to learn that from a crisis you never emerge the same. We will not come out of this pandemic crisis the same. Come out better or come out worse but: the same as we were before? No. We will never emerge the same. And today together, always together, we have to face this question: “How will we emerge from this crisis? Better or worse?” Of course, we want to come out better, but to do so we have to break the bonds of what is easy and the docile acceptance that “there is no other way”, that “this is the only possible system.” Such resignation destroys “us” and substitutes the isolation of “every man for himself”. And so, we must dream. It worries me that, while we are still paralysed, “there are already projects underway to restore the same socio-economic structure we had before” because it is easier. Let us choose the difficult path. Let us come out better.

In Fratelli tutti I used the parable of the Good Samaritan as the clearest possible Gospel presentation of this intentional choice. A friend told me that the figure of the Good Samaritan is associated by a certain cultural industry with a half-wit. This is the distortion that provokes the depressive hedonism that is meant to neutralise the transformative power that people possess, and in particular young people.

Do you know what comes to mind now when, together with popular movements, I think of the Good Samaritan? Do you know what comes to mind? The protests over the death of George Floyd. It is clear that this type of reaction against social, racial or macho injustice can be manipulated or exploited by political machinations or whatever, but the main thing is that, in that protest against this death, there was the Collective Samaritan who is no fool! This movement did not pass by on the other side of the road when it saw the injury to human dignity caused by an abuse of power. The popular movements are not only social poets but also collective Samaritans.…

Sisters and brothers, I am convinced that “the world can be seen more clearly from the peripheries”. We must listen to the peripheries, open the doors to them and allow them to participate. The suffering of the world is better understood alongside those who suffer. In my experience, when people, men and women, have suffered injustice, inequality, abuse of power, deprivations, and xenophobia in their own flesh – in my experience, I can see that they understand much better what others are experiencing and are able to help them realistically to open up paths of hope. How important it is that your voice be heard, represented in all the places where decisions are made. Offer your voice in a collaborative spirit; speak with moral certainty of what must be done. Strive to make your voice heard; but please, in those places, do not allow yourself to be constrained or corrupted. These two words are heavy with meaning, but I won’t talk about them now...