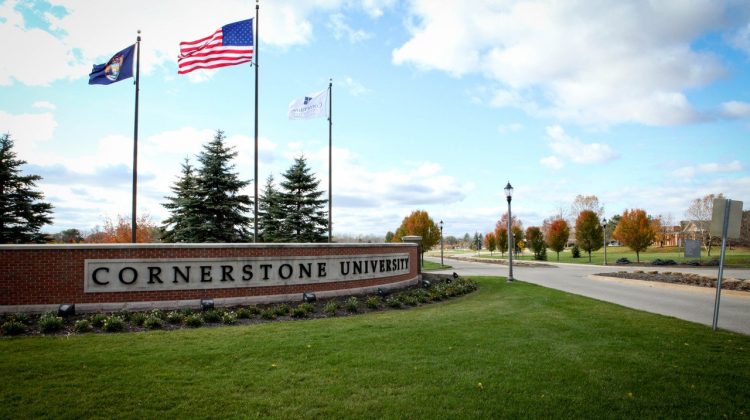 Cornerstone University is a Christian college in Grand Rapids, Michigan. Recently a group of alumni wrote an open letter to the board of trustees about the direction the university is taking under the leadership of new president Gerson Moreno-Riaño. The new president came to Cornerstone earlier this year after serving in an administrative role at Pat Robertson’s Regent University in Virginia Beach.

Here is the full letter with supplemental documents:

Dear Board of Trustees and Cornerstone Community:

We, the undersigned graduates of Cornerstone University, Grand Rapids Theological Seminary, and Professional Graduate Studies, write to express our concern. We are troubled by news which suggests that Cornerstone, under the new presidency of Dr. Gerson Moreno-Riaño, is headed in a direction which goes against our stated mission statement. As alumni, we are well aware of the shortcomings of our alma mater and that there is much that Cornerstone can and should address moving forward. In fact, the acknowledgement of our past failures is an important aspect of the concerns we have (specifically in the area of diversity, equity, and inclusion).

We also recognize that as alumni, we do not fully know the details and the context of the decision-making and events on campus. However, this document serves as our collective understanding of campus happenings that is apparent to alumni so far. Our concerns can be outlined by five overall main points that are supported by specific experiences, incidents, and additional information where possible and appropriate.

1. Decisions made by and through the new administration have significantly risked accreditation statuses at the undergraduate campus and the seminary. This affects both current students and alumni significantly.

The decision to pull a posted but unfilled counseling professor position at the seminary puts the CACREP accreditation process severely at risk. A certain ratio of faculty to students must be maintained for this accreditation. Numbers in the Counseling program at GRTS have been increasing, so this summer, a faculty position was posted to help maintain this ratio. Without discussion with or explanation to GRTS faculty, this position was pulled by the new administration without an alternative plan to fix the student to faculty ratio. Because of this, the CACREP accreditation that GRTS has been working for years to earn, has leapt significantly out of reach.

It has been brought to the attention of some alumni that the self-study document reported to the Higher Learning Commission received alterations after being approved by the board. Visual evidence has been shared showing stark differences between the board-approved document and the document that was submitted by the president during the Higher Learning Commission visit in September. This is more than an academic faux-pas – this action is wrought with deceit and arrogance on the part of the new president.

2. As alumni of Cornerstone, we are aware our alma mater has historically struggled to provide spaces and safety for minority community members (race, ethnicity, sexuality, gender, and ability) to thrive, yet there were good signs of progress in those areas. In light of recent actions, we have reason to believe that the University is, under Dr. Gerson Moreno-Riano’s leadership, undoing much of the good work in this area and taking active steps toward an institution that is even more difficult for minority community members to navigate.

The dismissal and/or sudden departures of the most prominent staff and faculty who were known for working towards a more inclusive environment is alarming. These names of those staff include Kenneth Russel, Dr. Gerald Longjohn, Susan Burner, Dr. Brenda King, Dr. Tara Kram, Dr. Shawn Newhouse, Dr. Timothy Gombis, and Dr. Artie Lindsay. To dismiss these staff and faculty, or to create an environment in which they have no desire to take part, who collectively spent decades of time at Cornerstone to create a more inclusive and safe environment, appears far too organized to be a coincidence. Due to statements made by the University, publicly and privately, we believe many of these individuals were dismissed at least partly due to their progressive work in Diversity, Equity, and Inclusion. As followers of Jesus, we are deeply disturbed by this connection.

Regarding the self-study report for the Higher Learning Commission (HLC), it is evident that a significant amount of the edits made by the administration were focused on the topic of Diversity, Equity, and Inclusion (DEI).

Text that was removed entirely from the HLC document included:

Text that was added included the president’s new plan for continuing the work of “diversity and inclusion” (note the absence of “equity”). This new plan hinged significantly around the idea to test staff, faculty, and students on their Intercultural Development Inventory (IDI), a test that demonstrates where the individual lands in their ability to reconcile and appreciate cultural differences in individuals and groups of people. However, there are two concerning elements of this plan. First, the president refuses to announce what company the IDI assessment will be conducted through. (The single individual on campus certified to lead this assessment, Kenneth Russell, is no longer employed at Cornerstone). Second, there is absolutely no reference to what next steps would follow the assessment given to staff, faculty, and students. The purpose of taking the IDI, or any inventory for that matter, is to identify where and how the people being assessed need to grow. The inclusion of an IDI assessment plan without an IDI growth plan indicates merely performative measures on the part of the president.

3. A false narrative of Cornerstone’s identity is being presented as factual and problematic

As Alumni, our professional and personal identities are tied with Cornerstone University as an institution. While we acknowledge that the education, co-curriculars, and extracurriculars that we engaged in at Cornerstone were imperfect, we simultaneously acknowledge the university’s trajectory of growth in important areas of kingdom values under the previous administration. However, it has come to our attention that the Cornerstone we identify with is being re-written as one that lacked Christ at its center, a narrative we strongly oppose.

In a letter sent to the Cornerstone community on August 9th, 2021, the president wrote in regards to the restructuring of the Student Development department: “This office will establish a Christ-centered, biblically based student and campus life support experience as an essential component of the Cornerstone student development process.” This statement is jarring and offensive to those of us who previously experienced positive life-change from this department. We are not complicit with a statement suggesting that the work of Christ was not evident in this department before its recent restructure.

During the announcement of Dr. Gerson Moreno-Riano as president, board members used very spiritually-charged statements to explain the appointment of the new president. Casting his nomination as “an answer to prayer” and a “miracle from the Lord” minimizes the board’s responsibility in the decision making process. Though we do not doubt that the members of the board were prayerful in their considerations, it was still their act as imperfect men and women to appoint Dr. Gerson Moreno-Riano and thus their responsibility to answer to concerns about his actions. We appreciate the board’s commitment to seeking God’s will in a candidate search process, but hinging the entire decision on their interpretation of His answer to that prayer is irresponsible.

4. Personnel changes, as prompted by the president, have left our students vulnerable to harm, even so far as risking their lives.

The dismissal of faculty and staff who were considered safe people for students of color (see point II.A.) have left current students of color without a place to gather and discuss their experiences on campus. It has come to our attention that students of color, both international and local, are now gathering off campus to receive the support they used to have on campus.

This is in direct tension with our identity as being a student-focused learning community. It seems as though with this new administration, when it comes to supporting our students of color, Cornerstone is suddenly neither student-focused nor willing to learn.

The length of time with which it took to fill positions within the Counselling, Health, and Wellness department was alarming. First, we remain in the midst of a global pandemic. Nurses and administrative support for them should have been hired well before students arrived on campus in the interest of student’s physical safety. Second, we are intimately aware of the mental health challenges faced by college students. A Director of Counseling and a significant number of counselors and supportive administrative staff should have been hired and trained well before the first student arrived on campus.

We are aware that each of these vital hires were only made after students arrived on campus, some after classes had begun. We have reason to believe that these hires were delayed as a direct result of new administration changes. Risking hundreds of student’s physical and mental health is an unwise, unethical, and unimaginable decision for an institution like Cornerstone to make.

5. The president has both written recent publications and taken actions at Cornerstone that indicate a “Christian Nationalist” ideology.

We are concerned overall with the direction in which Dr. Gerson Moreno-Riano has indicated he intends to take Cornerstone University. His published articles titled, “How to Save American Higher Education” and “Reviving American Higher Education: An Analysis and Blueprint for Action” raise significant questions about whether the institution is likely to head in a direction that is more Christian Nationalist than Christ-Centered.

We chafe at the idea that any individual or collective allegiance should be elevated near or above our calling to follow Christ. These articles by the president and actions he has taken at Cornerstone indicate his desire to center a majority, American-first ideology on campus, essentially ignoring the voices and experiences of international and minority students who can uniquely bring diverse perspectives to the student body.

As degree-holders from this institution, we have come to appreciate learning from a variety of thoughts and beliefs, even if they differ from our own. Our education at Cornerstone is partly responsible for this appreciation. We fear that, under Dr. Moreno-Riano’s leadership, nuance of thought and safety of discussion will eventually be lost on campus, ultimately making Cornerstone graduates less capable of “influencing our world for Christ.”

Having graduated from Cornerstone and gone into advanced degree programs and/or worked in our careers, we recognize the necessity for college students to engage with the language, perspectives, and theories of our world through a Biblical lens. We believe college is the ideal time for students to engage with perspectives in an environment that is safe and yet occasionally uncomfortable. In contrast, the ideology held by the president has already and will continue to create an environment that makes the majority of students consistently comfortable and some students unsafe. It is concerning that these lines appear to be drawn between students who are traditionally marginalized already (i.e., racial/ethnicity/ability/gender/sexual minorities).

For Cornerstone alumni to be taken seriously and be respected in their career fields, an educational experience that prepares them for that career is essential. Preparation requires thoughtful engagement with difficult topics and a recognition of what justice, courage, and humility look like in engaging the world around us.

Addendum (9:14pm): Since this post was published this morning,, the Cornerstone alumni letter has gone offline.