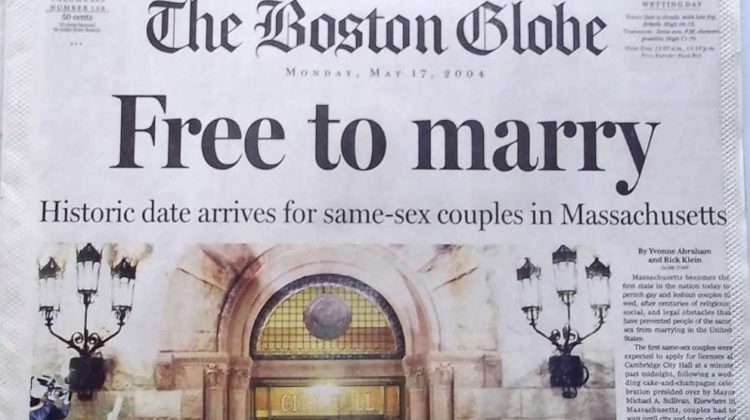 As I prepared for this week’s episode of A History of Evangelicals and Politics podcast I came across a column from syndicated columnist Kathleen Parker. I read it in the June 28, 2004 issue of the Wisconsin Rapids Daily Tribune. Parker writes two weeks before the Senate voted on a constitutional amendment declaring marriage between one man and one woman.

A nationwide Gallup Poll last month found that 55 percent oppose same-sex marriage (down from 65 percent in December) and 42 percent favor gay marriage (up from 31 percent in December). Maybe within the context of the Iraq war and disturbing news of beheadings–remember when the subject of ‘beheadings’ never came up in conversation?–gay marriage is way down the list of urgent concerns.

‘Live and let live’ has an irresistible ring to it in such times. Or perhaps the lack of interest is tied to the way the debate thus far has been presented. On the pro-gay marriage side, advocates have proposed the issue only as a question of fairness, civil rights, ,love and validation. No fair-minded persons wants to prevent another human being from equal protection under the law of the pursuit of happiness.

On the other side are mostly heard the voices of the religious right. Regardless of their sincerity, such voices tend to fall on deaf ears in a secular society. If people want preaching, they’ll go to church. Moreover, some of the rhetoric from the pews is so strident and off-putting, even devout people may prefer other company. There are plenty of good reasons to be skeptical about rearranging the basic structure of human society without involving the ‘Radicals in Black Robes’ who are trying to ‘force their distorted Homosexual Marriage views on 280 million Americans,’ as one Christian Coalition action alert recently put it….

Given that many religions and and denominations teach that homosexuality is a sin, church attendance alone could suggest you’re homophobic. To the extent that one believes or preaches scripture, one is a bigot. Hence some of the deep concern among legal professionals, as well as theologians.

A secular world that ratifies homosexual marriage would provide a legal foundation that would open the floodgates to civil litigation against religious leaders, institutions and worshipers. In such an environment, churches might be sued for declining to provide their sanctuaries for gay marriages, for example. Ministers could be sued for hate speech for giving a sermon on moral behavior. Churches that protest homosexual unions could face revocation of their tax-exempt status.

The delicate balance between church and state, in other words, is teetering on the high ledge at this moment. It’s ironic that those who oppose churches’ involvement in state concerns nonetheless have no compunctions when it comes to the state dictating what church can do. Even non-religious folk should be concerned. Either we believe in separation of church and state or we don’t, but you can’t have it both ways.”

So far the government has not interfered with churches, but they have tried to go after faith-based institutions such as colleges and hospitals.

The more I work on this podcast, the more I am convinced that the 2000s were to the Trump evangelicals what the 1960s were to the Reagan evangelicals. The days when nearly all of the Democratic candidates for president (Kerry, Edwards, Dean, Gephardt) supported the idea that marriage is between a man and a woman seem like ages ago. From the perspective of American evangelicals, things changed rapidly in this decade. And such rapid cultural change almost results in a backlash.