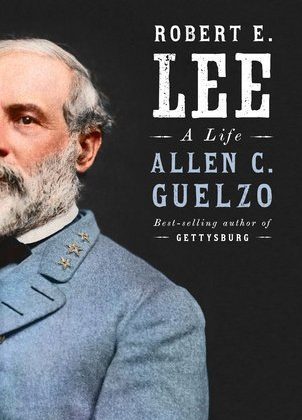 One of our generation’s best historians of the Civil War is the author of the forthcoming Robert E. Lee: A Life. In a recent piece at The New York Times, Allen Guelzo writes about the challenges of writing a biography of Lee in such a time as this.

This month in Virginia, the most famous statue of Robert E. Lee — a 21-foot-tall bronze equestrian sculpture — was swung down from its granite base on Richmond’s Monument Avenue and cut in two at the waist so that it could fit under highway overpasses on its final journey to an undisclosed state facility. Hundreds gathered to cheer the event as a victory for racial justice.

My reaction was more complicated. As a Yankee born and bred, I had never been schooled in deference to the Southern Confederacy’s most famous general. But as a historian of the Civil War era, I had been at work since 2014 on a new biography of Lee, partly because he is so dominant a figure on the Civil War landscape, partly because I had become intrigued by how to write the biography of a man who committed treason. However, the seven years that followed — and especially the violent white supremacist rally in Charlottesville in 2017 — quickly turned Lee into something different for many Americans. He became a symbol of our racial trauma, and one after another, Lee statues — in Dallas, in New Orleans, in Charlottesville, now in Richmond — came down.

I wondered whether the same toppling awaited my biography. I called my editor: Should we just put this manuscript in the freezer? My editor found my courage for me. No, he replied, we want to go ahead with this. If anything, he assured me, a thorough, unflinching and humane biography of Lee is more important now, as the monuments to him have been removed from view. That put me back on the rails. My book, “Robert E. Lee: A Life,” will be published next week.

There are some biographies that are almost impossible to write, but write them we must. Biography demands a close encounter with a subject, an entrance into motive, perception and explanation. The intimacy of that encounter carries with it the danger of dulling the edge of the historian’s moral judgment — and that kind of judgment is what makes historical inquiry worthwhile, something more than a mere jumble of events and dates. As Ian Kershaw wrote at the beginning of his two-volume biography of Adolf Hitler, the work of a biographer has the “inbuilt danger” of requiring “a level of empathy with the subject which can easily slide over into sympathy, perhaps even hidden or partial admiration.