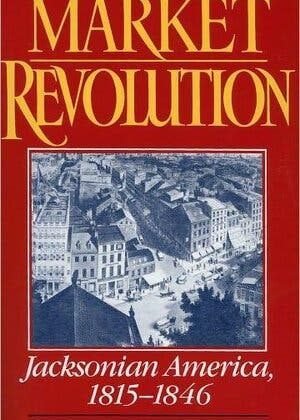 I read Charles Sellers‘s 1991 book The Market Revolution: Jacksonian America, 1815-1846 during my first year of graduate school. While I learned much from the book, I was never convinced by his portrayal of American farmers as “antinomian” evangelicals who expressed “rural culture’s deep strain of pre-Christian animism in suitably Christian theological terms” that manifested itself in “the subsistence’s world commitment to communal love against the market’s competitive ethic.” Though I did not write a dissertation on Jacksonian America, Sellers’s claim that rural people were backward, anti-modern people of faith triggered a lot of my thinking about what I would later call the “rural Enlightenment.”

Here is Clay Risen at The New York Times:

Charles G. Sellers, a historian whose work on early-19th-century America helped overturn the postwar consensus that democracy and capitalism developed in tandem by showing that in fact they were more often at odds, died on Thursday at his home in Berkeley, Calif. He was 98.

His wife, the historian and philosopher Carolyn Merchant, confirmed the death.

The son of a Carolina farm boy turned oil executive, Dr. Sellers drew inspiration from his own family’s rise to material wealth, even as he idealized the life they — and America — had left behind and castigated the competitive, commodified capitalist lifestyle that subsumed them. “Capitalism commodifies and exploits all life, I conclude from my life and all I can learn,” he said at a conference in 1994.

Such language often got Dr. Sellers labeled a Marxist. He wasn’t one, but he was a radical, both in his writing and in his politics — especially during the 1960s at the University of California, Berkeley, where he spent most of his career.

He was best known for his book “The Market Revolution: Jacksonian America, 1815-1846,” published in 1991, in which he argued that the rapid expansion of capital and industry during that period did more than just create a new economy; it altered everything, including the way people worshiped, slept and even had sex.

Such changes, he posited, were largely unwelcome, and the passionate reaction of most Americans consolidated in the rise of Andrew Jackson, who as president took on the coastal elites, most famously in his veto of the Second Bank of the United States in 1832.

Dr. Sellers detested Jackson’s pro-slavery sentiment and Indian removal policies. But he argued that the primary object of the Jacksonians’ hatred was not Black people or Native Americans but capitalism and its benefactors. He also showed that by the end of his second term, Jackson’s movement, torn by internal contradictions and co-opted by moneyed interests, had mostly collapsed.

“He saw the Jacksonians as the last great expression of a democratic sensibility doomed to be overthrown by a capitalist bourgeois sensibility,” said Sean Wilentz, a historian at Princeton whose own book, “The Rise of American Democracy: Jefferson to Lincoln” (2005), further developed several of the themes of Dr. Sellers’s book.

The book’s impact was profound, at least within academic history. A 1994 conference in London was dedicated to it, and the concept of the market revolution has become a fixed part of the field’s firmament.

“Sellers’s was the thesis that launched a thousand dissertations,” the historian Jill Lepore wrote in The New Yorker in 2007. “Evidence of the market revolution seemed to be everywhere; it seemed to explain everything.”

Charles Grier Sellers Jr. was born on Sept. 9, 1923, in Charlotte, N.C. His father, whose forebears Dr. Sellers later described as “two-mule farmers,” had moved to the city as a young man to attend business school, and by the time the younger Charles was born he was rising rapidly as an executive at Standard Oil. Charles’s mother, Cora Irene (Templeton) Sellers, worked for a church society that supported missionaries.

Charles’s parents were strict Presbyterians, and though he later disavowed religion, it colored his childhood and later drove his commitment to progressive causes. As a teenager, Charles became interested in civil rights; he later recalled attending a meeting of the N.A.A.C.P. at which he was one of only a few white people among hundreds of Black attendees.

He studied history at Harvard, but he delayed graduation until 1947 to join the Army. Afterward he returned to North Carolina and received his Ph.D. in history from the University of North Carolina, Chapel Hill, in 1950. He taught at the University of Maryland and Princeton before moving to Berkeley in 1958. He remained there until he retired in 1990.

Dr. Sellers’s first marriage, to Evelyn Smart, ended in divorce, as did his second, to Nancy Snow. Along with his wife, he is survived by his brother, Philip; his sons, Grier and Steen; his daughter, Janet; and two grandchildren.

Among the first things Dr. Sellers did when he got to Berkeley was join the local chapter of the Congress of Racial Equality. Working with the chapter, he fought against housing and job discrimination around Berkeley, and in 1961 he traveled with a contingent to Mississippi to support the Freedom Riders. Dr. Sellers was arrested, but he was let off with a suspended sentence.

In 1964 he was among the first and most vocal faculty members to support the Free Speech Movement at Berkeley, which opposed efforts by the administration to curtail campus activism.