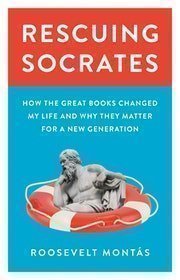 Historian Steve Mintz‘s recent column at Inside Higher Ed reviews Roosevelt Montas‘s forthcoming book Rescuing Socrates: How the Great Books Changed My Life and Why They Matter for a New Generation. Here is a taste:

For far too long, he argues, the American educational system steered the working class toward a practical or vocational or technical education.  Working-class students learned, in countless ways, that a liberal education was only for the privileged and the pampered.   But, as he argues eloquently, to deny working-class students access to the canon is to deprive them of essential resources for political agency.  A liberal education, he insists “is the most powerful tool we have to subvert the hierarchies of social privilege that keep those who are down, down.”

In addition to showing how engagement with great books helped him make sense of his own life, Montas offers a devastating critique of the practice of liberal education in the contemporary university and a critical analysis of the downsides of the triumph of the “research ideal.  As he puts it:  “Too often, professional practitioners of liberal education—professors and college administrators—have corrupted their activity by subordinating the fundamental goals of education to specialized academic pursuits that only have meaning within their own institutional and career aspirations.”

He also wrestles with postmodern approaches to the canon, rejecting the idea that a liberal education ought to be, first and foremost, “fundamentally critical and deconstructive, aimed at puncturing the pretensions of power elites and exposing the complicity of traditional hierarchies of value in systems of oppression and subjugation.”  Rather than simply teaching students to see “the contingency and instrumentality of all value systems,” he wants them to use their interaction with classic texts to define their own value system.

In recent years, defenses of a liberal education have become ever more airy and abstract: That it provides transferrable skills or core competencies or 21st century literacies or simply the ability to think critically.  But, as Montas makes clear, none of these convey the central features of a liberal education, which entails making sense of one’s identity, delineating a set of values, and plotting a direction in life.

No portion of this book is likely to be more controversial than Montas’s heartfelt defense of the Eurocentricity of a Great Books curriculum (which, of course, isn’t as Eurocentric as many claim).  Here, in a nutshell, is the argument he advances:  “Contemporary  notions like human rights, democracy, gender equality, scientific  objectivity, the free  market, equality before the law, and  many others,  cannot be adequately accounted for without  studying the ‘Western tradition.'”