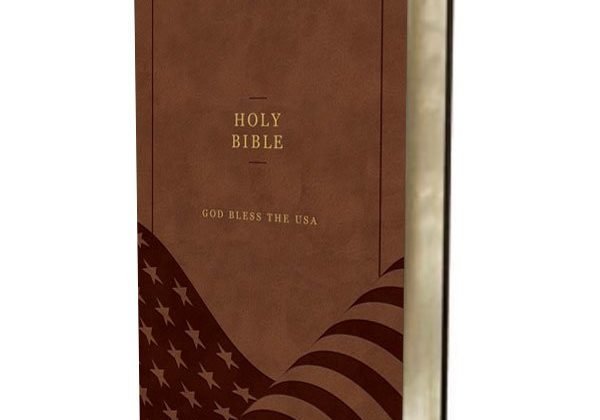 Over at Slate, Molly Olmstead reports on the Greenwood-inspired God Bless the USA Bible. Here is a taste:

In May, controversy over “the ultimate American Bible” briefly rocked the Christian publishing world. Big-name Christian authors penned a letter blasting it as “dangerous,” and more than 900 people signed a petition decrying the decision to print the book. The Bible’s advertised publisher, a part of HarperCollins Christian Publishing, disavowed the book and denied it ever had plans to print it in the first place.

The $60 Bible, which was originally set to ship early this month to commemorate the 20th anniversary of 9/11, was “inspired by” the country musician Lee Greenwood’s 1980s patriotic anthem “God Bless the USA” and packages Scripture with the U.S. Constitution, the Bill of Rights, the Declaration of Independence, the Pledge of Allegiance, and the handwritten chorus to Greenwood’s song. The ensuing uproar shows the challenges facing publishers in the lucrative Bible-printing business and the growing discomfort with Christian nationalism, the ideology that asserts the United States should be an explicitly Christian country.

The maker of the God Bless the USA Bible said it was not designed as a Christian nationalist book. Hugh Kirkpatrick, the president of the marketing company behind the Bible’s development, said he wanted to make a “one-stop shop” Bible to encourage Americans—and not just Christians—to learn about the “Judeo-Christian values” that he sees as underpinning the country’s founding. “We built this to be a bridge, not to divide,” he said. “We tried to say, ‘OK, we love freedom, and we all want to be free,’ and this process was to let people understand why the Founding Fathers used the Bible as a guide.” He added that he was not trying to “convert” anyone to his religion or his worldview. “There’s no racism involved, no nationalism involved,” he said.

Kirkpatrick originally claimed he reached an agreement with the evangelical publishing company Zondervan, the division of HarperCollins that owns the rights to the New International Version translation of the Bible, to print 1,000 copies. But many critics, alerted to its existence by reporting from Religion Unplugged, said that no matter Kirkpatrick’s claims, the message was clear. “The implication is the American founding documents were divinely inspired,” said Catherine Brekus, a professor of the history of religion in America at Harvard Divinity School.

A week and a half later, in the face of a public outcry, Zondervan denied its support for the Bible, leaving Kirkpatrick to scramble to find another way to manufacture his text. (Kirkpatrick claimed Zondervan bailed after the petition; Zondervan has said Kirkpatrick had been “premature” in marketing the Bible as an NIV Bible and that the company decided before the outcry began that the Bible was “not a fit.”)

My “favorite” part of the advertising campaign for this Bible is how the publisher touts the fact that the “Words of Jesus” are “in red.” I wonder if the the editors and publisher might reconsider the very premise of such a Bible if they read those red words seriously.