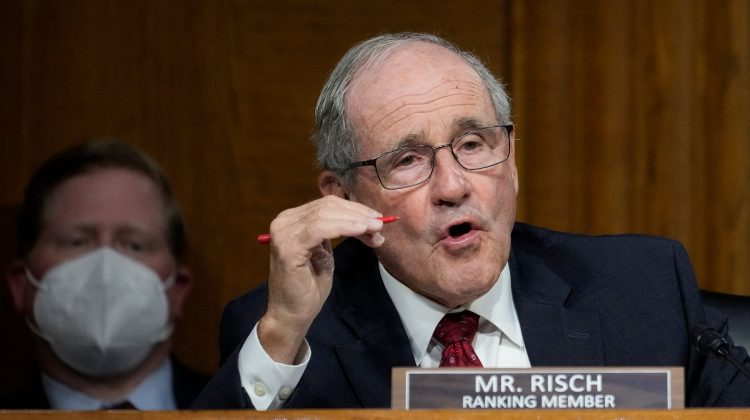 I’ll just let Washington Post columnist Dana Milbank explain. Here is a taste of his piece, “This is how a Republican lie is born“:

This is what happens when an entire political party takes leave of reality.

Sen. Jim Risch of Idaho, ranking Republican on the Senate Foreign Relations Committee, used a hearing intended for sworn testimony from the secretary of state on the Afghanistan withdrawal to allege that President Biden is mentally incompetent.

Risch first devoted his opening statement to continuing the long-running Republican narrative. “We know for a fact the president of the United States is somewhat disadvantaged here in that someone is calling the shots. He can’t even speak without someone in the White House censoring it or signing off on it,” the senator claimed. “As recently as yesterday, in mid-sentence, he was cut off by someone in the White House who makes the decision that the president of the United States is not speaking correctly. … This is a puppeteer act.”

Then, as the first Republican questioner, Risch used his time to elaborate on the slander. “Somebody in the White House who has authority to press the button and stop the president, cut off the president’s speaking ability and sound,” he told Secretary of State Antony Blinken. “Who is that person?”

Blinken chuckled as he replied that the loose-lipped Biden “speaks very clearly and very deliberately for himself.”

Risch was unconvinced. “Are you saying there is no one in the White House that can cut him off? Because yesterday that happened and it’s happened a number of times before that.”

Smiling, Blinken assured Risch that “there is no such person.”

Risch insisted, again, that “it happened yesterday at the Interagency Fire Center. It was widely reported. … Are you telling this committee that this does not happen, that there is no one in the White House who pushes the button and cuts him off in mid-sentence?”

After yet another back-and-forth on the matter, Blinken finally told the senator: “I really don’t know what you are referring to.”

There’s good reason for that: It didn’t happen.

The episode is worth unpacking because it shows, in miniature, how misinformation infects the Republican Party, rapidly spreads through partisan media and contaminates elected GOP leaders — who amplify and defend the falsehood, even when it’s shown to be wrong. This is how lies are born.

(In this case, it wasn’t even a useful lie. By making it his lead-off attack, Risch distracted attention from the Biden administration’s botched pullout from Afghanistan, a serious matter. Instead, Risch used the forum to portray Biden as senile, based on rubbish.)