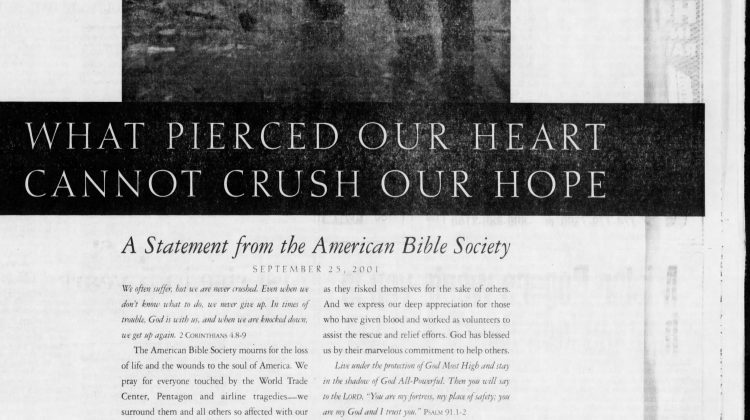 From The Bible Cause: A History of the American Bible Society:

One of the highpoints of the ABS engagement with its home in New York City occurred following the September 11, 2001 terrorist attacks on the towers of the World Trade Center. In the wake of the tragedy the staff of the Society went to work distributing Bibles, providing words of encouragement and comfort to those in need, and sharing the good news of Jesus Christ. The ABS quickly put together a booklet of scripture portions titled “God is Our Shelter and Strength.” Two days after the attacks a New York City police vehicle pulled up in front of 1865 Broadway to pick up ten cases of scripture booklets for distribution at Ground Zero. Police officers asked [ABS President Eugene] Habecker to help them make the delivery, and Habecker and Richard Sterns (the president of World Vision, who happened to be visiting that day) jumped in the car and headed downtown. In the days that followed the ABS took out ads in USA Today, the Wall Street Journal, and the New York Times offering consolation from the scriptures. Similarly, over 5,300 public service announcements were sent to English-language and Spanish-language radio stations around the country. The ABS website received an unprecedented number of visits. A distribution station was set up outside the Bible House. On September 23 at the “Prayer for America” at Yankee Stadium, more than twenty ABS volunteers handed out over 30,000 copies of “God is Our Shelter and Strength.” New York City needed spiritual support in a time of crisis and the ABS responded.

Here is one of the ABS ads: