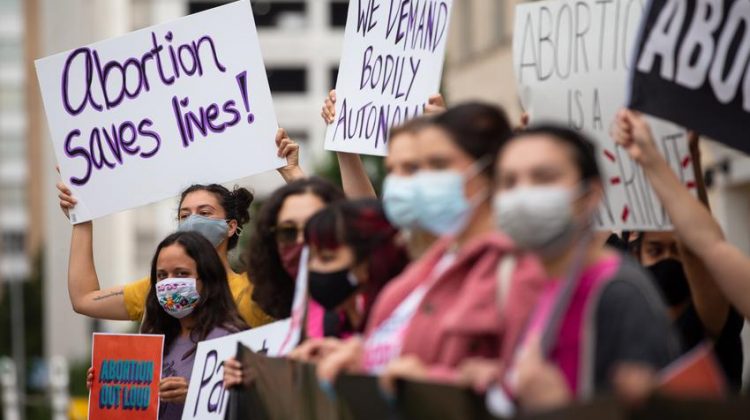 What are evangelical Christians saying about the Texas Heartbeat Act? Here’s a bonus addition of the roundup. And it’s not behind the Current paywall! 🙂

Just before midnight last night, the U.S. Supreme Court issued a momentous decision. In a 5-4 ruling, the Court allowed a pro-life law in Texas to remain in force. This law prohibits abortions once an unborn child’s heartbeat can be detected, which typically occurs around six weeks. Practically speaking, this law effectively bans nearly all abortions in the state of Texas!

Janet Porter, our dear friend and the architect of “heartbeat bills,” released a video with these poignant words:

“We have long awaited the day when children with beating hearts are legally protected, where our heartbeat laws are actually enacted and enforced. That place is Texas, and that day is today.”

Though the case—and the battle—is ongoing, this ruling is historic and represents a watershed moment in our nearly 50-year battle to protect the sanctity of human life. Like many of you, we at the Dr. James Dobson Family Institute have fought for the day when abortion would be seen for the evil it is. Friends, we are close! The science is unassailable and the truth is undeniable, but we must keep raising our voices until the ruling for life is irreversible!

I don’t know about Amy Coney Barrett, but it sounds like Andrew Walker has watched his share of John Wayne. You gotta love those tender complementarian culture warriors:

Albert Mohler voted for Trump in 2020. Yesterday he took a victory lap:

…It also shows you the power of the Supreme Court. It shows you the importance of the composition of the Supreme Court. Now, as we’re thinking about this, we need to look at the political context. The political context includes statements made midday yesterday by the President of the United States, a man who, by the way, throughout most of his career, tried to present himself in some sense as something short of an abortion rights zealot, but he gave that pretense up when he was running for the Democratic Presidential nomination in 2019 and in 2020. And of course, now, he is the President of the United States, he is a democratic president, and he is an avid advocate of abortion rights, now virtually without any restriction whatsoever, including the fact that he advocates the repeal of the Hyde Amendment, that would require all American citizens to pay for abortion through taxpayer monies.

He has also indicated that he would support efforts to try to extend abortion rights, with federal funding by the way, all the way up until, well, frankly, the moment of birth, which is exactly what you see in the laws that have already been put into place in states such as New York and Rhode Island. But looking at the statement the president made yesterday, he described the Texas laws extreme: “This extreme Texas law blatantly violates the constitutional right established under Roe v. Wade, and upheld is precedent for nearly half a century.”

Well, put a stop sign at the end of that sentence, we need to pause and understand exactly what the President of the United States has said. We need to notice at first, what he did not say, what many in the media will act as if he did say. They will act as if the President said, and the President had rightly said, that the Texas law was a blatant violation of the text of the United States constitution. But the President didn’t say that, because it would be fundamentally untrue. He said it was a violation of what he called the constitutional right established under Roe v. Wade. Just extremely important that we understand what’s going on there.

But now Joe Biden and the Democratic Party are arguing that this artificial right actually is so much a part of American constitutional law that it is untouchable. He goes on to make that second point when he said that the Roe v. Wade decision has been “upheld as precedent for nearly half a century.” Now here’s something to note, that might or might not even be a significant argument. It might be a significant argument if the fact it is a precedent that has stood for some time means that it has been unassailed even by legal authorities and even by members of the court. But that’s not true. The Roe v. Wade decision has been rightly assailed from the very beginning.

And furthermore, here’s something else to notice, every single precedent stands until it doesn’t. But what we have here is a classic clash of worldviews. The president went on to say, “The Texas law will significantly impair women’s access to the healthcare they need.” Okay, hold on a minute. The healthcare they need? Notice he is referring here to the willful termination, the ending of an unborn human life, in terms of a woman’s healthcare, describing that women need that healthcare.

And then he went on to say, this is very interesting. Let me read the sentence: “The Texas law will significantly impair women’s access to the healthcare they need, particularly for communities of color and individuals with low income.” Now, why would that be put in? Well, for one thing, because it’s political signaling, but there’s another aspect to this and that gets to the logic of the pro-abortion movement. And by the way, I don’t mean this as a partisan comment. It’s just an objective fact. It is now the orthodoxy of the Democratic Party in the United States, and that is this, that a right to abortion is not a functional right, if there is anyone who can’t afford it or who is inconvenienced trying to get it.

And so the argument here is that, and you’ll notice the bringing of race into this situation, communities of color and individuals with low incomes, they might not have the same opportunity as others to get on a plane and fly to, say, California for an abortion, therefore, what we have here is an inequity and an injustice. There you see how those particular issues function, particularly on the political left, but also just understanding how those issues now function in the American political conversation.

The president ended his comments by saying this. “My administration is deeply committed to the constitutional rights established in Roe v. Wade nearly five decades ago, and will protect and defend that right.” Again note, the President began and ended by referring to abortion as a constitutional right, but in perhaps an inadvertent honesty, admitted in both cases that it’s not in the constitution, but rather, it was invented, he says established, in the Roe v. Wade decision of 1973. Now, as I said, at this point, the big issue is what the Supreme Court did not do and that is big news. That can change. But at this point it is big news, and for that matter, it is very good news.

Joe Carter at The Gospel Coalition:

But by not blocking the new Texas law before the Dobbs decision, the court has allowed the state to conduct a grand experiment. Abortion clinics and abortion providers in Texas will likely be deluged with lawsuits, forcing them to reconsider their business model. The abortion providers challenging the law have already said that it will bar at least 85 percent of abortions in the state and will likely cause many abortion clinics to close. It will also force others—whether the person driving a woman to have an abortion or an abortion hotline staffer—from aiding the killing an unborn child.

There are many people who were willing to “aid or abet the performance or inducement of an abortion” when it posed no risk to them. But now that they risk being held financially accountable for their actions, they are likely to reconsider.

While it is still unclear what lasting effects this legal experiment will have, for now we can be grateful that there will likely be a few thousand babies in Texas whose lives have been saved by this innovative legislation.