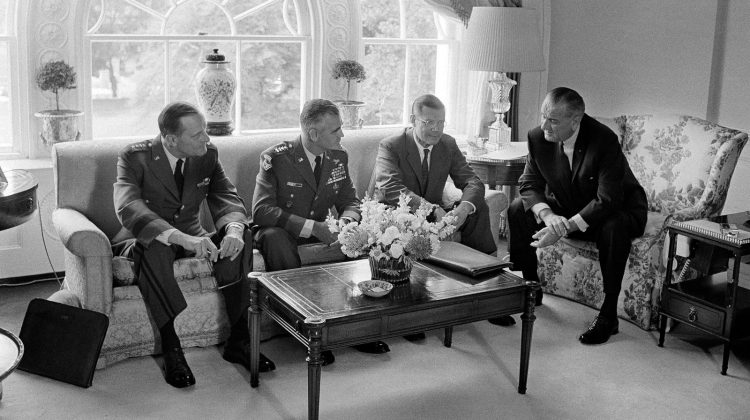 Georgetown University historian and Current contributor Michael Kazin compares Biden to LBJ. Here is a taste of his piece at The New York Times:

For days now, the news media has likened the chaotic end of our misadventure in Afghanistan, and the awful images of terrified people scrambling onto planes at the Kabul airport, to the final exit from South Vietnam. The comparison is overdrawn; the last American combat troops left Indochina two years before the collapse of the Saigon government.

But there is at least one potential parallel between the two conflicts that should have President Biden worried: The last time a war blew up in the face of a Democratic president, it derailed his domestic agenda and stalled the most ambitious social reforms of a generation.

To be sure, domestic political concerns should not overshadow the immediate urgency of getting all Americans and the Afghans who worked for them out of Afghanistan. But history shows how adversity abroad has often led to trouble for the governing party back home. Mr. Biden may not be able to save his ambitious legislative agenda unless he understands that lesson from the past.

In 1964, Lyndon Johnson and his fellow Democrats secured crushing majorities that enabled them to enact a flurry of landmark legislation: the Voting Rights Act, the bill establishing Medicare and Medicaid, an overhaul of immigration law. It is a feat Mr. Biden and progressive Democrats in Congress today would dearly like to emulate.

But Johnson’s decision early in 1965 to send thousands of troops to combat the Vietcong soon halted the momentum of his Great Society agenda and put Democrats on the defensive. A year later, as the war dragged on and protests mounted, Johnson’s approval rating dipped below 50 percent. In the midterm contests of 1966, the Republican Party picked up 47 seats in the House, and Democratic governors in eight states were replaced by Republicans — one of them a former actor in California named Ronald Reagan. By 1968, Republicans had taken back the White House, and Democrats never achieved a progressive policy agenda as far-reaching again.

Kazin’s forthcoming book is What It Took To Win: A History of the Democratic Party.