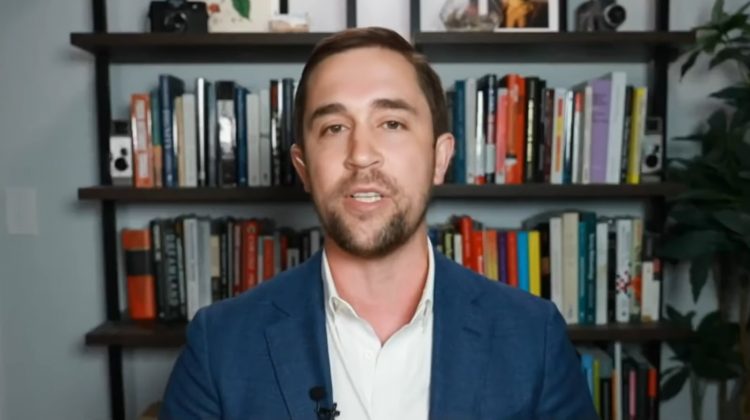 Some of you may remember Chris Rufo as the guy who triggered Donald Trump’s opposition to critical race theory. Ralph Richard Banks is a Stanford University law professor. Joan Coaston, the host ofThe New York Times‘s podcast “The Argument,” moderated this conversation.

But there are different strands to this discussion of race in the classroom right. And one strand focuses on identity, and is kind of obsessed with people’s individual identities, and intersectionality, and oppression matrices. And I’m not in favor of all of that generally in the classroom, especially for young people. But there’s another strand, which just focuses on our ability to tell the truth about American society both past and present. And there, the question is whether the prior situation, where we don’t talk about race, whether there are harms that have resulted from that — and I would suggest that there are. And even in my own life, for example, and I say this as a law professor now — I was taught as a child that the Civil War wasn’t really about slavery. It was about other stuff. It was about states’ rights. And then you flash forward 30 years later, my son is in elementary school in liberal, progressive California. And he’s taught about the end of slavery, and Abraham Lincoln as the Great Emancipator, and it was such a wonderful thing. And then he’s taught about the Civil Rights era. And he raised a question in his class — well, what happened between slavery and the Civil Rights era. Like, why didn’t ending slavery solve all the problems? And the teacher had omitted mention of lynching, omitted mention of the racial terrorism that actually has shaped the history of our family. And none of that appeared in the curriculum. So that’s the sort of thing that is, I think, much more common than the examples you’re giving, that we have this willful blindness to aspects of history that are uncomfortable, and that undermines our ability to recognize the challenges that we face in a society. Because we continue to reside within this sort of happy story about progress and freedom and equality and liberty, and to not recognize some of the complications of the story. And ultimately, it actually undermines the goals of education, because what we need children to most take from their schooling is the ability to be critical thinkers — right, and they can’t be critical thinkers if we are systematically shielding them from some of the unhappy parts of the story.

I would make two points. I mean, first, I started my kind of public school education in the late 1980s, and then moved forward from there — K through 12 public schools in California. I learned all about the history of slavery, segregation, Jim Crow, Native American genocide, the Black Codes, et cetera. And I think that’s important. I think that’s foundational. You have to be taking an honest look at history, a hard look at history, including those enormous injustices. I think that’s probably pretty standard. I think if you looked at the K through 12 school curriculum today in 2021 that you would find all of those as part of the history. I think that’s good. But you can do that without critical race theory. I think there’s another mutation in the rhetoric where when people say we don’t like intersectionality, we don’t like deconstructing identities, all of those buzzwords that seem to be creeping into the public education system — we just want to teach honest history. And I think that those are separate things. For example, I had what I think is a kind of comprehensive history of racial injustice in American public schools without critical race theory.

You had an extraordinary education, because I’ve taught law students here at Stanford Law School who are flabbergasted to learn that racially restrictive covenants were used in Northern California to restrict who could live where. Students arrived at law school and they are unaware of these very basic legal devices — racially restrictive covenants, which typically would bar entry to certain races. And this has shaped our entire nation. And most people actually don’t know about that. So it’s — I find it hard to believe that they’re being taught about that in high school.

Well, I think there’s both. The people who are advocating very strongly for critical race theory in K through 12 education are teachers’ unions. The NEA, the largest teachers’ union in the country, just this summer endorsed critical race theory at their annual convention. The public school bureaucracies are also very much in favor. In many cases, not in all cases, but in many cases programs, of kind of diversity, equity, and inclusion include some of these tenets of critical race theory. And again, even in Professor Banks’ kind of home area, Santa Clara County, the Office of Education has strongly endorsed critical race theory among — amidst, included, in their ethnic studies program, in which they denounced the United States as a, quote, parasitic system based on the invasion of settlers. And they’re encouraging teachers to, quote, cash in on kids’ inherent empathy in order to radicalize them into critical pedagogies and the kind of Freirean notion of revolution.

I’m not aware of these particular expressions of this commitment that you’re talking about.

Chris, you’ve been very involved in legislation that is attempting to remove this.

Yes. This is how I think about this, and so this is what informs my views. I spent years directing a documentary for PBS, public television, in and out of a public housing project in Memphis, Tennessee in the 38126 ZIP code. And I kind of often find myself reflecting on that experience, reflecting on the thousands of conversations I had, all of the research that I did, all of the people that I met. And then finding there’s such an enormous gap between what people told me where their real life concerns in South Memphis, the things that really impacted their life. And clearly, in South Memphis, it’s that top of the Mississippi Delta. You can feel the legacy of slavery, segregation, institutionalized racism. You can see it, almost. It’s palpable. So no one would deny or even minimize that. But then the solutions that come from critical race theory are — what I think are elite driven and elite serving solutions. They are things that are very good for Robin DeAngelo selling seminars and Ibram Kendi also making children’s books and self-help manuals, but don’t actually solve the problems for the people that I know and met and really admire and care for in South Memphis.

Thanks for that, Chris, but let me offer an alternative interpretation, though, which is that the villain here is actually not critical race theory. The villain is actually the set of conditions and the tendencies that gave rise to critical race theory. Right — so for example, we have always been unwilling to address the intertwining of race and class in American society. We’ve been unwilling to actually commit to do the things that would bring forth a true racial equality. When Brown v. Board of Education was decided, for example, in 1954, the court said you can’t bar or require students to go to racially segregated schools. And it pretty much stopped there, right? And the court declined to do any of a gazillion other things that might have helped to produce racially integrated schools, or that might have helped to create more equitable or more effective education nationwide. So the problem that we have in society, I think is really that we want to imagine that if we make some small tweaks around the edges, that will produce change. But it rarely does, and that’s why race continues to be the problem that it is in American society. So we all have incentives to take the easy way out rather than do the hard work of racial justice, but that’s not because of critical race theory. Critical race theory is really meant to illuminate that tendency in all of us so that hopefully we can do better.

And here is Banks’s final word:

…we want the best teachers we can possibly find. And we need to really do everything we can to give them the autonomy, to devise curricular materials that they think are good. Second point is that the longstanding problem in our society has not been that we focus too much on race, but that we focus too little on race, and that we have been unwilling to recognize the centrality of race in American society. So in teaching American history, you should tell that story. What we should not do — and I agree with Chris on this point — is we should not make people feel bad about their identities. We should not stigmatize people. We should not try to indoctrinate children by telling them what to think about contentious issues in society, especially young children. So I think we agree on that. But I do worry that this whole debate about critical race theory is an example of our public discourse and the ways in which our public discourse is lacking, which is that people are forming strong opinions about issues that they don’t really know that much about. They’re not really staying in their lane. They’re trying to express opinions that should really be the domain of professional educators. We don’t have much respect for the educators or give them enough leeway. And through it all— and I agree with Chris on this point — the kids who lose are really the disadvantaged students in our nation’s most impoverished areas who are disproportionately Black and brown. And those kids are the ones who are losing out, but they’ve been losing out long before people ever started talking about intersectionality or white fragility. And I hope— and I know we share the hope that we can do right by the children in our society, because we are not going to thrive as a nation unless we can put aside all these adult squabbles and all these ideological inclinations and figure out what we need to do to make opportunities as universal as talent.

A few quick thoughts after reading this exchange: