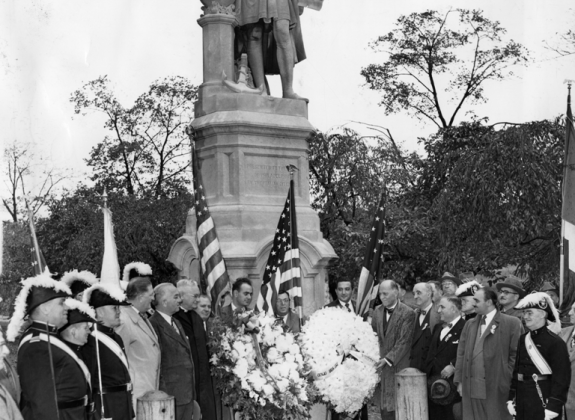 A Common Pleas court judge overturned the City of Philadelphia’s decision to remove the statue last year during the racial unrest following the death of George Floyd.

Here is The Philadelphia Inquirer:

A Philadelphia judge on Tuesday ruled that the controversial Christopher Columbus statue at Marconi Plaza in South Philadelphia can remain there, reversing a decision by city officials to have it removed.

In a seven-page decision, Common Pleas Court Judge Paula Patrick said the decision last year to remove the statue was not supported by law and was based on insufficient evidence.

“It is baffling to this court as to how the City of Philadelphia wants to remove the Statue without any legal basis. The city’s entire argument and case is devoid of any legal foundation,” Patrick wrote.

The judge’s ruling overturned a Sept. 29 decision by the city’s Board of License and Inspection Review that upheld a July 24 decision by the Philadelphia Historical Commission to remove the statue.

Patrick wrote that the city failed to provide an adequate opportunity for public input about the future of the statue.

Kevin Lessard, spokesperson for Mayor Jim Kenney, said in an emailed statement: “While we are very disappointed with the ruling, we’re reviewing it now and exploring all potential options — including a possible appeal. The statue remains in Marconi Plaza and will continue to be secured in its existing box.”

The suit was brought by Friends of Marconi Plaza; Rich Cedrone, the group’s president; and Joseph Q. Mirarchi, a South Philadelphia resident.