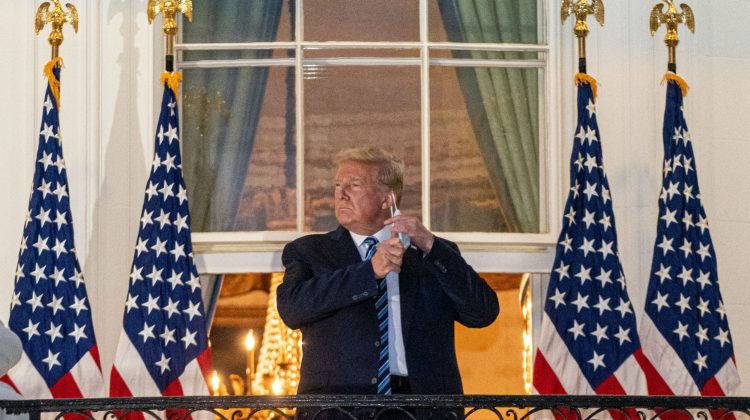 Damian Paletta and Yasmeen Abutaleb are the authors of the forthcoming Nightmare Scenario: Inside the Trump Administration’s Response to the Pandemic That Changed History. In an excerpt published at The Washington Post, we learn that Trump’s case of COVID-19 was a lot worse than the White House acknowledged at the time. There was a point when his doctors did not think he would make it.

Health officials and White House medical advisers thought Trump’s experience with COVID-19 might lead him to take the virus seriously. That did not happen.

[Centers for Disease Control and Prevention Director Robert] spent the weekend Trump was sick praying. He prayed the president would recover. He prayed that he would emerge from the experience with a newfound appreciation for the seriousness of the threat.And he prayed that Trump would tell Americans they should listen to public health advisersbefore it was too late. The virus had begun a violent resurgence. Redfield, Fauci, Birx and others felt they had limited time to persuade people to behave differently if they were going to avoid a massive wave of death.

There were few signs that weekend that Trump would have a change of heart. It had already been a battle to get him to agree to go to Walter Reed in the first place. Now, he was badgering Conley and others to let him go home early. Redfield heard Trump was insisting on beingdischarged and called Conley on the phone. The president can’t go home this early, Redfield advised the doctor. Hewas a high-risk patient, and there were no guarantees that he wouldn’t backslide or experiencesome complication. (Many covid-19 patients seemed to be on an upswing and then quickly deteriorated.) Trump needed to stay in the hospital until that risk had passed. Conley agreed but said the president had made up his mind and couldn’tbe convinced otherwise.

If they couldn’t keep him in the hospital, the advisers hoped that Trump would at least emerge from Walter Reed changed man. Some even began mentally preparing to finally speak their minds. It would surely be the inflection point, they all thought. There’s nothing like a near-death experience to serve as a wake-up call. It was, at the end of the day, a national security failure. The president had not been protected. If this fiasco wasn’t the turning point, what would be?

Just as the country had been watching a few days before, many people tuned in again as Trump took Marine One back to the White House’s South Lawn on Monday night. They saw him step out in a navy suit, white shirt and blue-striped tie, with a medical mask on his face. He walked along the grass before climbing the steps to the Truman Balcony.

But Trump didn’t go inside. It was a moment of political theater too good to pass up — as suffused withtriumph as his trip Friday had been humbling. He turned from the center of the balcony and looked back toward Marine One and the television cameras. It was clear that he was breathing heavily from the long walk and the climb upthe flight of stairs.

Redfield was watching on television from home. He was praying as Trump went up the steps. Praying that he would reach the Truman Balcony and show some humility. That he wouldremind people that anyone could be susceptible to the coronavirus — even the president, the first lady and their son. That he would tell them how they could protect themselves and their loved ones.

But Trump didn’t waver. Facing the cameras from the balcony, he used his right hand to unhook the mask loop from his right ear, then raised his left hand to pull the mask off his face. He was heavily made up, his face more orange tinted than in the photos from the hospital. The helicopter’s rotors were still spinning. He put the mask into his right pocket, as if he was discarding it once and for all, then raised both hands in a thumbs-up. He was still probably contagious, standing there for all the world to see. He made a military salute as the helicopter departed the South Lawn, and then strode into the White House, passing staffers on his way and failing to protect them from the virus particles emitted from his nose and mouth.

Right then, Redfield knew it was over. Trump showed in that moment that he hadn’t changed at all. The pandemic response wasn’t going to change, either.