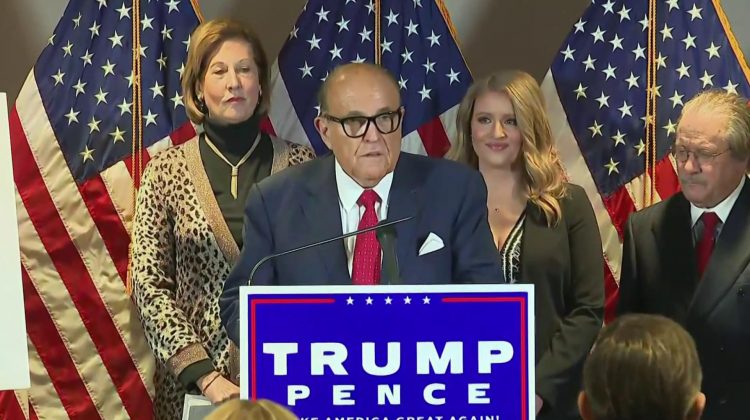 Now it is time for the appropriate courts to go after Sidney Powell and Jenna Ellis.

A New York appellate court suspended Rudolph W. Giuliani’s law license on Thursday after a disciplinary panel found that he made “demonstrably false and misleading” statements about the 2020 election as Donald J. Trump’s personal attorney.

The court wrote in a 33-page decision that Mr. Giuliani’s conduct threatened “the public interest and warrants interim suspension from the practice of law.”

Mr. Giuliani helped lead Mr. Trump’s legal challenge to the election results, arguing without merit that the vote had been rife with fraud and that voting machines had been rigged.

“We conclude that there is uncontroverted evidence that respondent communicated demonstrably false and misleading statements to courts, lawmakers and the public at large in his capacity as lawyer for former President Donald J. Trump and the Trump campaign in connection with Trump’s failed effort at reelection in 2020,” the decision read.

Here is the key takeaway from the 33-page report:

The seriousness of respondent’s uncontroverted misconduct cannot be overstated. This country is being torn apart by continued attacks on the legitimacy of the 2020 election and of our current president, Joseph R. Biden. The hallmark of our democracy is predicated on free and fair elections. False statements intended to foment a loss of confidence in our elections and resulting loss of confidence in government generally damage the proper functioning of a free society. When those false statements are made by an attorney, it also erodes the public’s confidence in the integrity of attorneys admitted to our bar and damages the profession’s role as a crucial source of reliable information (Matter of Nearing, 16 AD2d at 516). It tarnishes the reputation of the entire legal profession and its mandate to act as a trusted and essential part of the machinery of justice (Ohralik v Ohio State Bar Assn, 436 US at 447). Where, as here, the false statements are being made by respondent, acting with the authority of being an attorney, and using his large megaphone, the harm is magnified. One only has to look a the ongoing present public discord over the 2020 election, which erupted into violence, insurrection and death on January 6, 2021 at the U.S. Capitol, to understand the extent of the damage that can be done when the public is misled by false information about the elections. The AGC contends that respondent’s misconduct directly inflamed tensions that bubbled over into the events of January 6, 2021 in this nation’s Capitol. Respondent’s response is that no causal nexus can be shown between his conduct and those events. We need not decide any issue of “causal nexus” to understand that the falsehoods themselves cause harm. This event only emphasizes the larger point that the broad dissemination of false statements, casting doubt on the legitimacy of thousands of validly cast votes, is corrosive to the public’s trust in our most important democratic institutions.