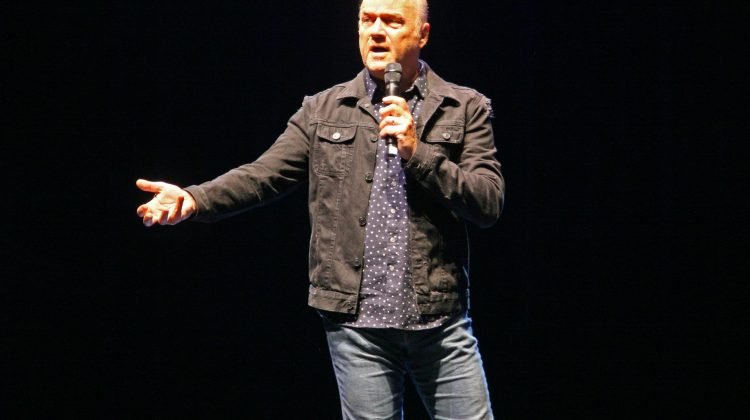 On April 5, 2020, Donald Trump announced (via Twitter of course) that he would be streaming the Palm Sunday service at Greg Laurie’s Harvest Christian Fellowship, an evangelical megachurch in Riverside, California.

It was not the first time the president heard him speak. Eighteen months earlier, Laurie was in the White House offering a “history” lesson to Trump, Mike Pence, Ben Carson, and more than 100 evangelical leaders invited as part of a “thank you” dinner for the support they gave to the president during the 2016 election campaign. “One of our founding fathers named George — not Washington but Whitefield, an evangelist from England — preached the Gospel and thousands of colonists came to faith in Christ and it brought about moral change in a culture as a revival always does,” Laurie said. He continued: “We were able to sow the seeds of this new nation in that receptive soil of morality based on a faith in God. I don’t think we could have done it without it. I mentioned that not only are we founded with revival, we need to have another revival.”

Laurie is 67-years old, but he still exudes California cool. He is always tan and he usually makes appearances in blue jeans, denim or leather jackets, sun glasses, and sneakers. (Imagine a member of Beach Boys getting “saved” and forming a megachurch!)

Laurie’s biography and spiritual journey is also a part of his appeal. He was born in Long Beach, California, raised by a single mother who married seven times and, to use Laurie words, was a “raging alcoholic.” In high school, Laurie tried to satisfy his search for meaning with drugs until, at the age of 17, he found God through the ministry of charismatic “hippie” preacher Lonnie Frisbee. This led Laurie into the Jesus People Movement and he quickly came under the influence of Calvary Chapel’s Chuck Smith, the balding middle-aged pastor often considered the leader of the movement in Southern California. Today the church reaches more than 15,000 people at four different campuses, including one in Maui, Hawaii.

Laurie speaks often of the religious revival he witnessed during the early years of the Jesus People Movement. Led by Smith and Frisbee, California hippies were turning away from acid and sex and becoming followers of Jesus Christ. People were getting born again and Smith, Frisbee and Laurie and others were holding mass baptisms in the Pacific Ocean. Influenced deeply by what he saw and experienced, Laurie would pursue a dual, but closely related, calling as a pastor and an evangelist. Soon he was holding Billy Graham-style crusades in Anaheim Stadium. The Los Angeles Times reported that over 500,000 people had made professions of faith during these events. Over the years, Laurie has successfully cultivated his brand. According to one website, he has a net worth of $20 million. Preaching the Gospel has been good to him. The Jesus People revivals of the 1970s not only saved his soul, but gave him his slice of the American dream. God and country. Evangelical revival and the pursuits of happiness.  Salvation and success. In Laurie’s mind there is no tension between these things.

On this particular pandemic Palm Sunday, there is no audience at Harvest Christian Fellowship. Just the cameras and a special “visitor” from Washington D.C.  Laurie and his team appear on a carefully constructed set that includes a fake-brick facade covered with Laurie family photos and the revolutionary-era Pine Tree Flag inscribed with the words “An Appeal to Heaven.” At first glance, it is unclear what this flag has to do with Palm Sunday, but we will soon find out.

Early in his sermon Laurie quotes 2 Chronicles 7:14: “If my people who are called by my name humble themselves, and pray and seek my face and turn from their wicked ways, then I will hear from heaven and will forgive their sin and heal their land. Such national healing, Laurie argues, could only come through another Great Awakening. If Americans will pray and seek the face of God–if they will make an “Appeal to Heaven”–a spiritual revival will take place that would not only save individual souls, but reconnect the country to its Christian roots. Indeed, this is the evangelical Christian version of make America great again.

Laurie is back with his links between the Great Awakening and the American Revolution in a piece at Decision magazine titled “Would God Send Another Great Awakening“:

What is termed the First Great Awakening was in the 1700s, led by such men as Jonathan Edwards and George Whitefield. This is actually before we were officially a nation. George Whitefield, an evangelist from England, came and preached to masses of people in the colonies. So many, in fact, that it is estimated some 80% of the colonial population would have heard him speak. As a result of his preaching, thousands of people were coming to Christ, and a revival broke out. So you can make a very good case for the fact that America as a nation was actually born in a time of spiritual awakening. It was that fertile soil of revival that produced the conditions in which the founders of our nation could succeed in their great experiment of a nation built on self-governance, liberty and virtue.

I also addressed Laurie’s use of American history here.

Alan Heimert’s argument in Religion in the American Mind is alive and well in popular evangelical culture.