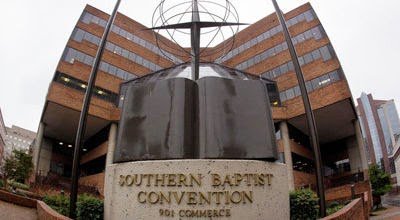 The Southern Baptists are meeting in Nashville later this month and it is going to be a doozy!

Women in the church.

This sounds more like a soap opera than a meeting of the largest Protestant denomination in the United States.

Over at The Atlantic, Peter Wehner reflects on the meaning of Moore’s exit from the convention. Here is a taste:

The chasm that currently exists between how Christians like to think of themselves and how they are actually seen—between the invocations of grace and the acts of ungrace, between condemning impurity in others while engaging in it themselves—has to be fully acknowledged and dramatically narrowed. Christians would do themselves a favor if they spent a little less time obsessing over the secular left, a little less time feeling that they are victims and a persecuted minority, and a little more time in honest self-examination. As a well-known preacher from many years ago asked, “Why do you look at the speck of sawdust in your brother’s eye and pay no attention to the plank in your own eye?” He asked the question because he recognized the tendencies against which we all have to fight.

A few days ago, I wrote to a friend of mine who’s a pastor and asked him: If so many people who say they have committed their life to Christ live a life that is in many areas so antithetical to the ways of Christ, what are we to make of that? He offered some thoughtful insights on Jesus’s parable about the wheat and the tares and the reality of human sin, from which Christians are hardly immune. But because he’s honest and not interested in spin, he admitted, “I do find the lack of sanctification in so many folks frustrating, as do you. And yes, I do get sick of making explanations for what shouldn’t be.”

The poet Christian Wiman, who returned to his faith after having wandered from it, wrote in My Bright Abyss: Meditation of a Modern Believer that “Christ is always being remade in the image of man, which means that his reality is always being deformed to fit human needs, or what humans perceive to be their needs.” The challenge that followers of Jesus face is to push aside as best we can the deformations, including those we generate ourselves, in order to move a few steps closer to the reality of Jesus. Because for all of our failures of his followers, and despite all the things we might get wrong, we keep coming back. Our hearts were won over not by Jesus’s moral demands but by his grace, not by his miracles as much as by his wounds, not because he needs us but because we need him.