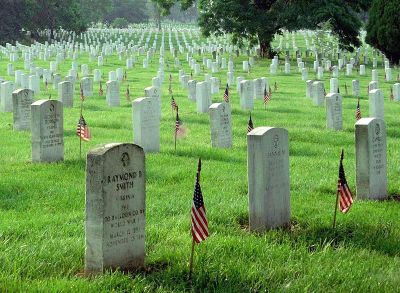 It was no accident.

Retired Army Lt. Col. Barnard Kemter was midway through his speech at a Memorial Day ceremony in an Ohio cemetery when he started discussing the role that freed Black enslaved people played in an early event honoring Civil War dead.

Suddenly, his microphone cut off. Kemter, 77, tapped it a few times before yelling for assistance, video of the Monday event shows.

“I assumed it was a technical glitch,” Kemter, who carried on with his speech off-mic while he waited for the audio to return, told The Washington Post.

But the disruption was no glitch. One of the event’s organizers later admitted the audio had been deliberately turned down, telling the Akron Beacon Journal that Kemter’s discussion of Black history “was not relevant to our program for the day.”

“We asked him to modify his speech, and he chose not to do that,” Cindy Suchan, president of the Hudson American Legion Auxiliary, told the Beacon Journal.

Kemter’s speech included details about a Memorial Day commemoration in Charleston, S.C., organized by a group of Black people freed from enslavement less than a month after the Confederacy surrendered in 1865.

About three days before his speech, he emailed the text to event organizers. One organizer responded by asking Kemter to revise his speech and “leave out the part of history of it.” The organizer, whom Kemter declined to name, didn’t specify which paragraphs they wanted gone or why they objected, he said.

So, after consulting with a Hudson public official, Kemter arrived at Markillie Cemetery on Monday ready to deliver the unedited version of his final draft to the crowd of about 300 people.

Kemter began his speech by discussing how Memorial Day was born after hundreds of thousands of soldiers who died in the American Civil War were in need of a proper burial place. Then, shortly after beginning a discussion of the role that Black Charleston residents played in the holiday, his microphone stopped working.