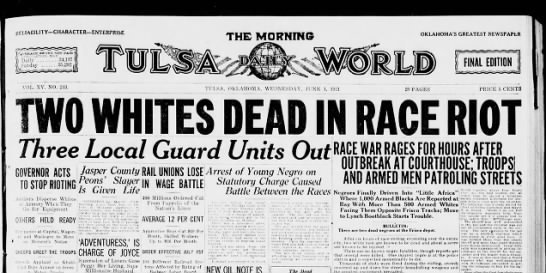 Get up to speed on the Tulsa Race Massacre here.

The image at the top of this post is the front page of the Tulsa World on June 1, 1921: There was another edition from that day. The above addition is “Final” and the edition below is “Extra”:

It is worth noting that the Tulsa World was known for its stand against the Ku Klux Klan.

Here is an editorial from the Tulsa Tribune on June 1, 1921:

I don’t have the time to interpret these headlines or this coverage, but I thought it might be good to have these in one place. The first headline above speaks volumes.