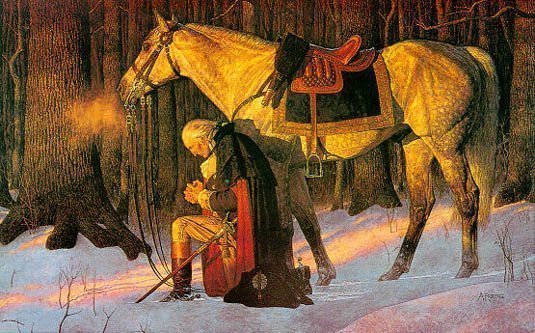 In the winter of 1777-1778 the Continental Army faced one of its lowest points in the Revolutionary War. British troops under the direction of General William Howe were in control of Philadelphia. George Washington’s soldiers were coming off major defeats at Brandywine and Germantown. Amid public criticism stemming from these military failures, Washington took his army to Valley Forge, Pennsylvania, eighteen miles northwest of Philadelphia. Here they would heal their wounds and prepare for the Spring campaign. The conditions at Valley Forge, as any elementary school student knows, were not good. The army lacked some of the basic necessities of life. It was cold. Washington, who managed to keep the army together during these trying times, praised the heroic determination of his soldiers: “To see Men without Cloathes to cover their nakedness, without Blankets to lay on, without Shoes, by which their Marches might be traced by the Blood from their feet…is a mark of Patience and obedience which in my opinion can scarce be parallel’d.

As the army struggled through the Valley Forge winter, a local man named Isaac Potts, the owner of the house where Washington was staying, walked through the woods near the encampment and heard a voice amid a bower of oak trees. He realized quickly that the voice he heard was Washington himself, who was kneeling on the ground praying to God. Potts was moved. As a Quaker he opposed this war, but his sympathies were with the British. Seeing Washington in prayer, however, changed everything. As Potts arrived back home he announced to his wife, Sarah: “I have this day seen what I never expected. Thee knows that I always thought the sword and the gospel utterly inconsistent; and that no man could be a soldier and a Christian at the same time. But George Washington has this day convinced me of my mistake.” Seeing Washington in prayer transformed Potts into a patriot: “If George Washington be not a man of God does not, through him, work out a great salvation for America.”

Versions of Potts’s account of Washington praying at Valley Forge appeared in dozens of nineteenth-century school textbooks, including William Holmes McGuffey’s well-known Eclectic Reader series. In 1866 Henry Brueckner recaptured this event in a painting, The Prayer at Valley Forge. It portrays Washington on his knees in the snow making supplication to God, supposedly on behalf of his army and the American cause. Brueckner’s painting has become a well-known piece of Americana. Visitors to the Washington Memorial Chapel at Valley Forge and the prayer chapel in the U.S. Capitol can find a stained-glass rendering of the image. In 1928 it appeared on a U.S. postage stamp.

There is one major problem with Pott’s story of Washington praying at Valley Forge–it almost certainly did not happen. While it is likely that Washington prayed while he was with his army at Valley Forge in the winter of 1777-1778, it is unlikely that the story reported by Potts, memorialized in painting and read to millions of schoolchildren, is anything more than legend. It was first told in the seventeenth edition (1816) of Mason Locke Weems’s Life of Washington. Weems claimed to have heard it directly from Potts, his “good old FRIEND.” Potts may have owned the house where Washington stayed at Valley Forge, but his aunt Deborah Potts Hewes was living there alone at the time. Indeed, Potts was probably not even residing in Valley Forge during the encampment. And he was definitely not married. It would be another twenty-five years before he wed Sarah, making a conversation with her in the wake of the supposed Washington prayer impossible. Another version of the story, which appeared in the diary of Reverend Nathaniel Randolph Snowden, claims that it was John Potts, Isaac’s brother, who heard Washington praying. These discrepancies, coupled with the fact that Weems was known for writing stories about Washington based on scanty evidence, have led historians to discred it.

Of course this does not stop people like David Barton and other Christian nationalist purveyors of the past to claim that the story is true. The latest is Jack Hibbs, the controversial pastor of Calvary Chapel in Chino Hills, California. In Hibbs’s lecture, which appears to have taken place at the Museum of the Bible in Washington D.C., he actually includes some new (and false) claims about the story. Watch:

The way Hibbs tells the story, it sounds like George Washington fed the 5000!

As I have said multiple times, the entire Christian nationalist movement, led by Hibbs and others, is built on a false foundation that cannot stand under the weight of facts and good American history.