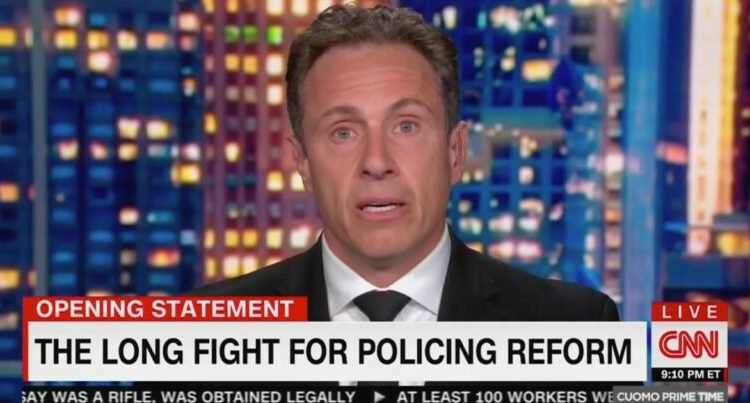 After Cuomo finished his monologue, Michael Smerconish and Van Jones joined him on air to talk about this. You can listen to their conversation here.

I thought your commentary was brilliant and depressing and you’re right–I sent out a tweet today and I said 6 individuals our 7 million who had the J&J shot developed complications. We don’t know if that’s causation or correlation, but we immediately shut down that entire program in the midst of a pandemic. And then comes the news of what transpires in Indianapolis–8 folks are dead; and I hate to say it, but I buy into your logic. I don’t think anything changes.

Here’s an embarrassing thought: I was driving to work very early this morning having heard the news and running through my mind [I asked] “when did this last occur? I couldn’t place it. I knew it was Boulder, but I couldn’t remember that it was a supermarket [and] I couldn’t remember that ten had died. When I got to work I looked-up all the other recent incidents, and Chris, I’m a news junkie! It’s amazing how many of them I’d forgotten. I guess what I am really frightened about is the ease with which we’re all now so willing to just move on to the next day’s news cycle.

There are a bunch of awful people in country. There’s a lot more awesome people in the country. There’s a lot more good people who just don’t what to do, Chris. The awful people are screaming and yelling and blocking everything and tweeting and canceling and acting like complete lunatics. And they get all the attention. The vast majority of people are good folks in both parties, all races [and[ all faiths. They just don’t know what to do yet. They are waiting for some instruction….I think we’re hitting peak division. I think now, once we get passed this [George Floyd] trial, you are going to see at the grass roots level a bottom-up movement to restore some stuff. We can’t fix stuff at the federal level, but…people are tired of the crap and looking for things to do. It’s gonna start-off small and it’s gonna start to grow. It’s gonna be people coming together, tired of the noise. I think you, [Chris], are speaking for millions and millions of people tonight. And anyone’s whose got a solution at the local level, this is the time to speak-up.

Look, if African Americans start creating militias all of a sudden we are going to have gun reform just like that. That would be the quickest way to get there.…

If Black folks form militias for the first time in our nation’s history, we’ll begin considering the Second Amendment and the language that pertains to militias. The silver lining in all of this is that I agree with Van–there’s more that unites us. There’s a lot of folks who are centrist who are turned-off by the profit-engineered folks who benefit from fomenting dissent.…

Just for the record, if Black militias form it would not be the first time it happened in our nation’s history:

Here is historian Nathan Connolly and Ed Ayers at the Backstory Guys:

Indeed, the Black Panthers’ Ten Point Program made a direct connection between their mission and the Second Amendment:

We believe we can end police brutality in our Black community by organizing Black self-defense groups that are dedicated to defending our Black community from racist police oppression and brutality. The second Amendment of the Constitution of the United States gives us the right to bear arms. We therefore believe that all Black people should arm themselves for self-defense.

Finally, when the Black Panthers were publicly carrying firearms in the streets of American cities, the National Rifle Association helped write the bill to prevent them from doing so.