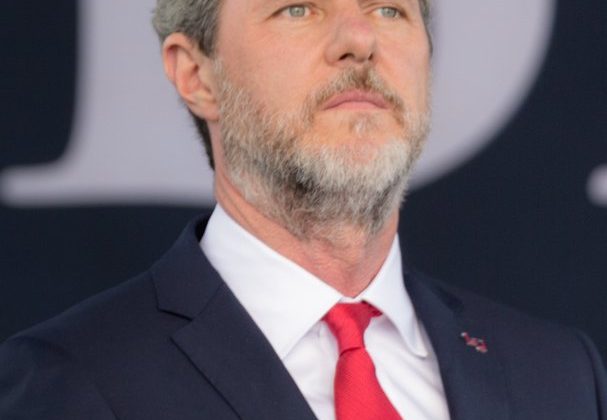 I can’t keep up with all these Liberty University stories. Last week disgraced former president Jerry Falwell Jr. was touting the COVID-19 vaccine and catching a lacrosse game on campus. Earlier this week Liberty fired Trey Falwell, Falwell Jr.’s son. Yesterday the largest Christian university in the world announced that Mike Pompeo and Mike Huckabee would be joining its Standing for Freedom Center.

Now this from Ruth Graham at The New York Times:

Liberty University has sued Jerry Falwell Jr. for $10 million, exacerbating the messy divorce between the Christian university and its former president whose family name has been synonymous with the university since its founding.

The suit, filed on Thursday, alleges breach of contract and fiduciary duty. It claims that Mr. Falwell withheld scandalous and potentially damaging information from Liberty’s board of trustees, while negotiating a generous new contract for himself in 2019 under false pretenses. Mr. Falwell also failed to disclose and address “his personal impairment by alcohol,” the suit alleges.

In August, Mr. Falwell claimed that he was being threatened with extortion by a man who had a yearslong sexual relationship with Mr. Falwell’s wife, Becki. The suit claims that by keeping the sexual entanglement and resulting “extortion” a secret, Mr. Falwell endangered and later damaged Liberty’s reputation. Instead of divulging the active threat to Liberty’s board, “Falwell Jr. chose personal protection,” the suit claims.

A spokesman for Liberty University, Scott Lamb, said the school had no comment on the suit.

In a statement, Mr. Falwell said that he had always abided by the requirements for university staff and that the lawsuit was “full of lies and half truths” and “yet another attempt to defame me and discredit my record, following a series of harsh and unnecessary actions.”

The university filed the suit on the same day that its board of trustees arrived in Lynchburg, Va., for its semiannual meeting, at which they are set to discuss the university’s future, including its search for a permanent leader. Jerry Prevo, a close associate of Mr. Falwell’s father and the former pastor of a large church in Alaska, has been serving as interim president since August. Mr. Prevo is also a member of the board’s powerful executive committee.

Some highlights from the suit:

I have so many thoughts and questions.

For example, how does Liberty University, a school that believes in an inerrant Bible that should be interpreted literally, reconcile its suing of Falwell with 1 Corinthians 6?

It seems as if Liberty University has a strong case. Indeed, Jerry Falwell’s behavior has damaged the reputation of the school. Liberty’s lawsuit openly admits that Falwell took them down a wrong path. One wonders if Falwell’s, and by extension Liberty’s, fall from grace would have happened if Donald Trump did not run for president.

Which leads to my next set of questions:

To what extent is the Liberty case a microcosm of what the pursuit of political power, ambition, and support of Donald Trump has done to the evangelical church at large? If Liberty University trains “Champions for Christ,” and Falwell’s behavior, which was partially related to his endorsement of Trump, hurt its ability to train such “champions,” then wouldn’t the larger evangelical community’s embrace of Donald Trump have the same effect on the witness of the Gospel in the world? Of course the pool boy scandal predates Trump’s presidential campaign, but this entire affair, and the damage it has done to Liberty University, is inseparable from the culture of the Trump years. Future historians will tell the story this way.