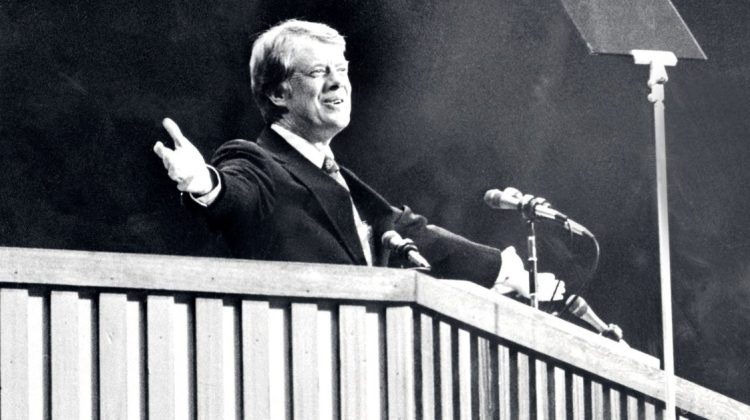 Earlier this year I wrote a short post about the CNN documentary “Jimmy Carter: Rock and Roll President.” Here is a taste of that post:

This is a great documentary, but I wish Wharton would have said more about how Carter thought about the connections between his love of popular music and his evangelical faith. Wharton includes footage of Carter teaching Sunday School. She occasionally shows the interior and exterior of Carter’s church in Plains, Georgia. She includes a clip of Carter talking about how he explained his Christian faith to Bob Dylan when the folk hero visited the Georgia governor’s mansion. Carter also seems to have had an influence on the faith-based music and activism of Bono. But the faith angle is too peripheral to the story Wharton tells.

Later this month, a new documentary, “CARTERLAND,” will debut at the Atlanta Film Festival. (It sounds like the title of a Rick Perlstein book).

ATLANTA, April 6, 2021 /PRNewswire/ — The 45th annual Atlanta Film Festival will open this April with the world premiere of the long-awaited documentary, “CARTERLAND.”

This groundbreaking new documentary film examines the tragic, yet inspiring story of America’s most misunderstood president and explores how Jimmy Carter’s selfless leadership and moral integrity ultimately cost him the presidency. The film features a wealth of archival footage and interviews with the former president as well as his vice president, Walter Mondale. Also featured is expert commentary from a range of politicians and scholars including billionaire activist Tom Steyer, Washington Governor Jay Inslee, Oregon Governor Kate Brown, former UN Ambassador Andrew Young, and many others. The documentary is directed and produced by brothers Jim Pattiz and Will Pattiz, collectively known as the Pattiz brothers. CARTERLAND will mark the brothers feature film debut.

“This remarkable film shows why the long struggle for peace, human rights, equal opportunity, and the environment must continue. While we made progress on all these fronts during my administration, there is much more to be done,” Carter said in a statement. “I am proud of this fine film by the Pattiz brothers, and Rosalynn and I are delighted it will debut at the 2021 Atlanta Film Festival.”

Author Jonathan Alter added, “Carterland’ is an outstanding look at the hugely underrated Carter presidency—the best, most important documentary about this much-misunderstood man. The film is especially good at explaining how Carter was the greatest environmental president in American history.”

This year’s Atlanta Film Festival will run from April 22-May 2 and will feature a mixture of drive-in, in-person, and virtual screenings. CARTERLAND will premiere April 24th to in-person and virtual festival-goers. Those in attendance can expect a “special guest appearance” prior to the screening in Atlanta.

I will be watching to see how CARTERLAND handles Carter’s born-again faith. Stay tuned.