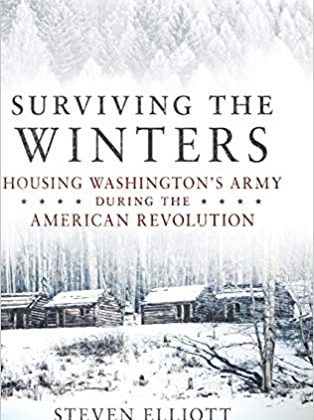 Steven Elliott is Part-time Lecturer of History at Rutgers University-Newark. This interview is based on his new book, Surviving the Winters: Housing Washington’s Army during the American Revolution (University of Oklahoma Press, 2021).

JF: What led you to write Surviving the Winters?

SE: My interest started as an undergraduate, when I began working as a summer seasonal ranger at Morristown National Historical Park in New Jersey. discovered that very little had been written on the Continental Army’s 1779-1780 winter encampment at Morristown compared to its well-known 1777-1778 winter at Valley Forge, so I wrote my senior thesis and my master’s thesis on Morristown. I had originally hoped to write my dissertation as a military and social history of the Morristown winter, similar to Wayne Bodle’s The Valley Forge Winter. But, throughout my early research, two questions continued to loom. The first, what about all of the other winter encampments? We occasionally discussed the 1778-1779 Middlebrook encampment at the Park since it fell between Valley Forge and Morristown, but that left several other winters to study. The second, what about the shelters themselves? The Park featured reproduction log-huts depicting how soldiers lived during the winter; visitors found these fascinating but I had never come across any studies of huts or winter quarters in all of the military history reading I had done. So, my dissertation ultimately became more of a study of all of the Continental Army’s winter camps from 1775 to 1783, and how and why the army came to settle on huts rather than barracks or billets or tents as its main form of shelter. I explore these topics in even greater depth in Surviving the Winters.

JF: In two sentences, what is the argument of Surviving the Winters?

SE: George Washington’s Fabian strategy, which eschewed direct engagements with the superior British army in favor of holding position in defensible terrain and containing the British to their coastal enclaves, required sound and secure shelter for soldiers and their civilian followers. The Continental Army’s development and refinement of what I term “the log-hut city” method of quartering troops represented a unique adaptation to the problem of military housing in the North American environment, and stands as a crucial component of Continental strategy.

JF: Why do we need to read Surviving the Winters?

SE: Most students of the Revolutionary Era are familiar with the Valley Forge winter, but the other winter encampments, except for Morristown, are little known. This book fills in those gaps by looking at the entire war, and in the process helps us better understand the winters at Valley Forge and Morristown by situating them within a broader narrative of adaptation and maturation that began outside Boston in 1775 and did not culminate until New Windsor in 1783. Anyone interested in the battles and campaigns of the Revolutionary War will finally get the other half of the story, the winter and spring months that traditional accounts tend to overlook. For scholars and students less concerned with military operations, I hope the book’s coverage of environmental and medical topics will be of interest. Providing soldiers with good housing entailed enforcing sanitation regulations, building effective systems for drainage and food distribution, and enacting a program of inoculation and quarantine to mitigate smallpox.

SE: I have been interested in history since elementary school. Throughout high school and undergrad I was interested in military history, particularly eighteenth century armies. I came to study the Revolution and early America fairly late. Late in my undergrad career I realized that proximity to sources made studying the War of Independence much more feasible than European wars. Living in New Jersey, where so much fighting occurred during the war, certainly sparked my interest as well.

SE: Surviving the Winters tells a focused story of the winter camps, but I had trim much of the social and political research into military housing that I had done for my dissertation. I hope to shape this into another book exploring the Third Amendment and how military installations and civilian communities came to occupy largely separate spheres during the Revolution and early republic. Recent images of national guardsmen camped out in parking garages in Washington DC have, I hope, stoked renewed interest in such topics. I am also working on an article exploring the “New Army” raised in 1798 during the Quasi War. This army has largely been written off as a political tool of the Federalists, but I have come across some great source material showing that in terms of organization and discipline the New Army functioned fairly well, and represented the country’s largest military mobilization of regular troops between the Revolution and the War of 1812.