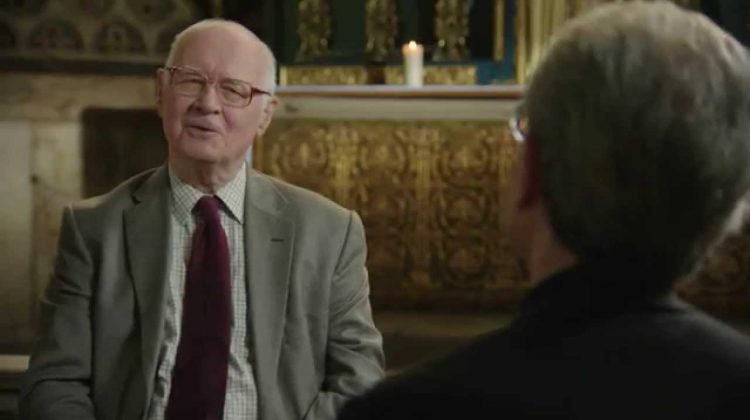 A couple weeks ago I was part of a Messiah University Zoom event in which several faculty members shared their spiritual pilgrimages. (Annie Thorn of “Out of the Zoo” fame organized the event). One of my co-panelists was Ted Davis, a well-known and well-respected historian of religion and science. When someone asked him to say a few words about how he reconciles his Christian faith with science, he read a short devotional by Christian scientist John Polkinghorne. It was only later I learned that Polkinghorne passed away the previous day at the age of 90.

Over at the website of Biologos, Davis reflects on Polkinghorne’s life and career. Here is a taste:

“There were giants in the earth in those days” – Genesis 6:4

With a rare mixture of sadness and admiration, I learned that John Polkinghorne went to be with God on Tuesday, March 9, 2021. A proud Cornishman, John was born in 1930 to a working class family in a seaside town. The youngest of three children, his brother died in World War II and a sister in infancy. Reared in the devout Christian faith of his parents, John liked to describe himself as a “cradle Christian.” As he wrote in his autobiography, “I cannot recall a time when I was not in some real way a member of the worshipping and believing community of the Church” (From Physicist to Priest, 7). A strong desire to minister to the body of Christ through word and sacrament led John fundamentally to change course in his late forties, when he resigned his professorship in physics at Cambridge to become an Anglican priest. It was a stunning decision for someone in the same academic department as the first Islamic Nobel Laureate, Abdus Salam (John’s doctoral advisor), and the late Stephen Hawking, who later became the most famous scientist in the world. If his colleagues were not entirely surprised that he sought a larger role in the church, they were astonished that he gave up physics.

A brilliant mathematician, John had risen very high in physics himself. As an undergraduate, he had learned quantum mechanics (QM) from Paul Dirac, whom he regarded as “undoubtedly the greatest British theoretical physicist of the twentieth century.” Hearing Dirac lecture was “profound.” John was “carried along enthralled by the experience,” which he compared with listening to a Bach fugue (26). After working with Salam, he was a postdoctoral student at Caltech with Murray Gell-Mann, famous for bringing James Joyce’s word “quark” into particle physics and developing a robust theory by that name. QM became John’s own specialty too. His book, The Quantum World (1986), sold upwards of 100,000 copies, and his elegant little paperback on QM for Oxford University Press’ popular series of “Very Short Introductions” is still mostly readable to this former physics student who hasn’t studied QM in nearly fifty years. In the classroom, however, John brought Dirac’s rigor to the task, rapidly filling the chalkboard with equations and putting the fear of God into his students. “I was terrified of him,” a world-class astrophysicist once told me. That reminded me of a similar statement from a fellow historian of science, who had done his first degree at Cambridge in physics.

My own encounters with John were not nearly as scary. I first met him somewhere around 1989, when I joined Michael Hunter’s research project on the unpublished papers of Robert Boyle, housed at the Royal Society in London. The Society kept a book in the library, containing chapters about the life and work of each Fellow, the highest honor in British science. John had been elected a Fellow in 1974. One day while taking a break from reading seventeenth-century manuscripts, I stumbled upon the book, read his story and saw the accompanying photograph. I had only just recently heard his name mentioned very favorably by a friend. As it happens, a little while later I noticed a well-dressed man in a clerical collar browsing casually in a corner of the library. Knowing that ordained Fellows were almost as rare as magnetic monopoles, I had probable cause to introduce myself. Sheepishly, I ambled awkwardly across the room. Pardon me, sir, are you perhaps Professor Polkinghorne? The wide grin and the friendly eyes gave me the answer even before he spoke. When I expressed interest in learning more about his work, he invited me in the warmest possible terms to attend the lecture he was giving that same evening in a famous London church, St Lawrence Jewry.

I no longer remember what he said, but the sinking feeling of being in over my head was hard to forget. Yet, I recognized that important ideas were coming out of his balding head, that when his bushy eyebrows moved I needed to pay close attention. It was a rocky start, but a decade later I had learned enough to help students read Belief in God in an Age of Science (1998) with some appreciation.

What do I myself appreciate most about Polkinghorne? He had the convictions of a traditional Christian, coupled with genuine brilliance, a deep knowledge of scientific theory and practice, more than a rudimentary grasp of philosophy of science—and the scholarly fortitude to challenge the status quo in the burgeoning new field of “science and religion.”