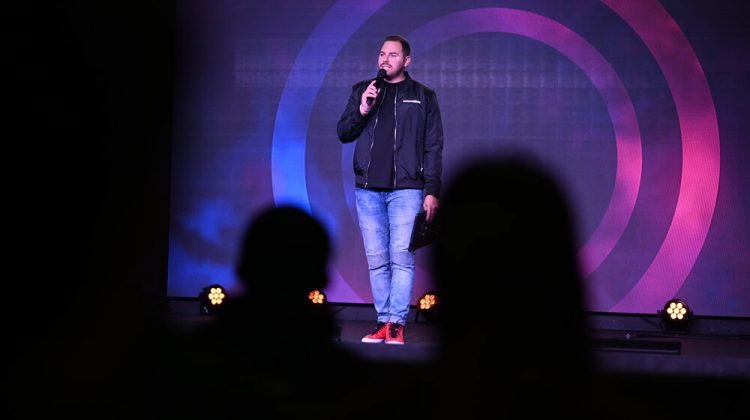 Jackson Lahmeyer is the pastor of Sheridan Church in Tulsa, Oklahoma. Here what is written on the “Who We Are” page of the church website:

Most people are familiar with the name Sheridan Christian Center. It was one of the most famous churches at one point because of the names that came through it. Billy Joe Daugherty, Kenneth Copeland, and Kenneth Hagin Sr.

This place has always been on the cusp of innovation and change. 28 different ministries locally have come out of this place to touch millions of people around the world. However, a time came when it fell off the map. It became the place where great things used to happen. An old saying has been passed down to me that says “If you are only ever talking about what you have done in the past, you must not be doing anything in the present.”

Let me tell you, the historic Sheridan Christian Center has been reborn as Sheridan.Church and the innovating, cutting-edge, days are right in front of us.

Here at Sheridan.Church, we are on a mission to see people come to know what it means to be whole. Whether it is spiritually, emotionally, physically, or financially.

We are committed to accompanying people in the winding path of life toward a brighter future. Many people often struggle to find a safe space where people won’t criticize or judge them for a murky past. That is where we come in. Most places ask you to cover up your wounds to keep you from bleeding on others. At Sheridan, we show you our scars, so you know that you aren’t alone. Regardless of societal taboo or past experience, we seek to be a refuge for the weary. This is done through numerous community groups and opportunities to connect with similar people and become a family.

This description tells me that Sheridan Church is a charismatic, prosperity gospel congregation. The reference to Kenneth Copeland and Kenneth Hagin in the first paragraph is a dead give-away. So is the reference to “financially” in the church mission statement in the fourth paragraph above.

Lahmeyer is an Oral Roberts University graduate and runs a “lawn care and junk removal service.” He is also running for Senate in Oklahoma in the hopes of unseating fellow conservative Christian James Lankford.

So what distinguishes Lahmeyer from Lankford? According to this article at The Frontier, Lahmeyer believes Lankford compromised his political and spiritual convictions by voting to certify the votes of the 2020 presidential electoral college on January 6, 2021. Here is a taste of Ben Felder’s piece:

By most accounts, Sen. James Lankford is the type of politician a person like Jackson Lahmeyer would seem to support. Both have been pastors and subscribe to a deeply conservative and evangelical faith tradition. Their views against abortion, defense of the 2nd Amendment, and that conservative culture is under attack from the “radical left” also align.

But where Lahmeyer diverges is in his belief that Donald Trump was the rightful winner of the 2020 presidential election.

“I saw fear all over (Lankford) on Jan. 6, he caved in like an absolute coward and that let me know he is not the man to represent our state and the fight that our country is in right now,” Lahmeyer said earlier this month when he announced his campaign to take on Lankford in next year’s Republican primary.

Lankford had planned to challenge President Joe Biden’s 2020 win and was in the process of making his case on the Senate floor on Jan. 6 when a mob of Trump supporters stormed the U.S. Capitol, some threatening to execute the vice president and members of congress in objection to Biden’s win.

Hours after the attack, Lankford withdrew his challenge and voted to certify the electoral college results.

Lankford has cultivated a deeply conservative platform since he was elected to the Senate in 2014 that would seem to position him well for reelection next year in one of the reddest states in the nation. But in a state like Oklahoma, where Trump won every county in 2016 and 2020, fidelity to the former president remains a standard for many voters that Lahmeyer is hoping to tap into.

Lahmeyer says he is running because “our country is under attack from radical leftism and corrupt RINO’s.” He adds, “Our faith, family and freedom are the targets of this radical agenda to destroy America.” Lahmeyer has the endorsement of disgraced Trump National Security Adviser Michael Flynn.

On the Bill of Rights: “If we lose the 2nd Amendment, we will lose the 1st Amendment which is what the radical left is truly after.”

On abortion: “Abortion is the greatest evil in our country with no close 2nd.”

On America first: “The Trump Administration policy of America First is the only way to have a strong United States.”

On “cancel culture: “The movement of tearing down statues like Abraham Lincoln, trying to replace Federal Holiday’s like Columbus Day and erasing books from Dr. Seuss is a direct assault of (sic) our way of life.”

On election integrity: “Although some politicians have apologized for questioning fraud for their own political purposes, it is clear that there was massive voter fraud in 2020 unlike any other election.”