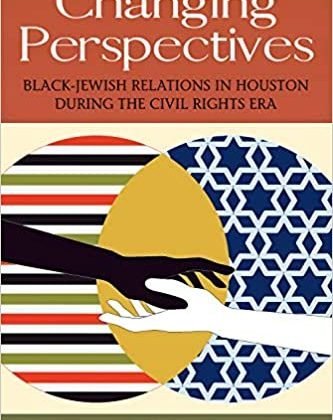 Allison Schottenstein is Annual Adjunct Assistant Professor of History at University of Cincinnati’s Blue Ash College. This interview is based on her new book, Changing Perspectives: Black-Jewish Relations in Houston during the Civil Rights Era (University of North Texas Press, 2021).

JF: What led you to write Changing Perspectives?

AS: As a granddaughter of a Holocaust survivor, I grew up understanding the dangers of prejudice. My grandfather was appalled and frightened by the horrific images of segregation seen on television and witnessed in person. It greatly disturbed him and in turn distressed me. I wondered if other American Jews were distressed by the plight and severity of treatment African Americans faced. Did they compare the prejudice Jews faced throughout Europe, most especially during the Holocaust with the African American experience in America? While an undergraduate at Brandeis University, I began to explore these ideas and was amazed that there was a whole field committed to African American and Jewish relations. My capstone was on “Portrayals of the American Black Jewish Child’s Identity in Memoirs and Fiction.” In graduate school at University of Texas at Austin, my interest expanded to include Jewish and Mexican relations. I wrote about Sam Perl, a Lay Rabbi, who inspired Jewish and Mexican relations in a Texas border town. The pinnacle of my exploration began when I explored Black-Jewish Relations in Houston, Texas. I was determined to tell the remarkable story of Houston’s passage through the Civil Rights Era. Black-Jewish relations blossomed in Houston, inspired by great political leaders, such as Mickey Leland and Barbara Jordan. I felt empowered to tell this story, especially in this current time when Americans are finally waking up to the importance of race relations and community building. Houston was an example of what relations could look like. My grandfather would have been proud because he believed people could change for the better if given a chance.

JF: In two sentences, what is the argument of Changing Perspectives?

AS: Changing Perspectives argues that over time, Jewish and Black leadership developed a political relationship due to Houston’s transformation into a multicultural city. Only when the Houston Jewish community began to embrace their identity, especially their commitment to Israel, did they find an unexpected connection with the African American community who was also beginning to embrace the importance of having an empowered Black identity.

JF: Why do we need to read Changing Perspectives?

AS: I want people to value the importance of local history with respect to Black-Jewish relations. I also want to encourage people to study ethnic histories in the South.

AS: I fell in love with history while interning at Hebrew Union College’s American Jewish Archives in Cincinnati, Ohio. Dr. Gary Zola opened my eyes to the importance of archives. He showed me how historians could weave together a story, like detectives. All the clues are just waiting to be discovered in the archives. I wanted to take my ideas, prove their existence and bring them to life. Changing Perspectives is the result.

AS: Lately, I have developed a strong interest in the importance of pop culture and history. I want to explore media’s influence on Black-Jewish relations through film, literature and newspaper. Has the media exploited the relationship or promoted it over time?