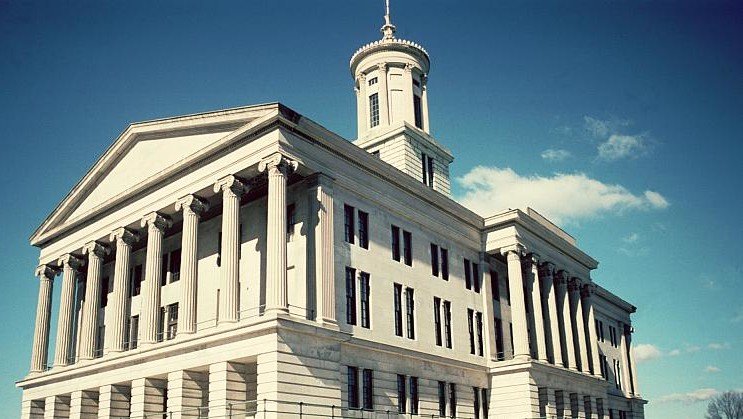 Earlier this week I wrote a post on the Tennessee Historical Commission’s 24-1 vote to remove the bust of Nathan Bedford Forrest from the Tennessee State Capitol building in Nashville. Some members of the Tennessee General Assembly oppose this decision.

Forrest, let’s remember, was a Confederate general and the first Grand Wizard of the Ku Klux Klan..

Now it appears that members of the Tennessee General Assembly want to make “Amazing Grace” (as sung by Dolly Parton) the official state song and the Bible the “official state book.”

In his defense of the bill to make “Amazing Grace” the state song, sponsor Mike Sparks (R) said that the Christian hymn is a song that would “really brings folks together.” He then introduced Dr. Stephen Shearon, an emeritus professor of musicology at Middle Tennessee State University and a member of the university’s Center for Popular Music. Shearer talked about the history of “Amazing Grace” and tied it to Tennessee history. He argued that when Judy Collins had a hit with the song in the 1970 it vaulted “Amazing Grace” into the cultural mainstream. Shearon noted that Collins learned the song from her Tennessee grandmother, a Southern Methodist.

Shearon then mentioned the Parton version of the song along with several others, including Aretha Franklin’s rendition:

Shearon argued that because of the Collins, Parton, and Franklin versions, among others, “Amazing Grace” has now “taken its place among secular society as the song of choice when healing and unity are required” and it has provided such healing and unity to “people of many faiths, the religious and the irreligious.” Shearon then made some more loose and indirect connections between the tune of “Amazing Grace” and Tennessee history.

Shearon concluded his remarks by endorsing “Amazing Grace” as a fitting state song for the people of Tennessee. Sparks was then recognized again. He mentioned how another Middle Tennessee State music professor recommended that he buy Steve Turner’s book Amazing Grace: John Newton, Slavery and the World’s Most Enduring Song. Sparks then read a back cover blurb from U2 front man Bono. He told the committee that finding this Bono endorsement was “a God thing.” Apparently a blurb from Bono means that God approves of Sparks’s bill.

It is hard to argue with Shearer’s claims about the universal nature of “Amazing Grace.” But the song, at its core, is still a Christian hymn. The population of Tennessee is 17% non-Christian. (Of course it is also 52% evangelical Protestant).

We will see how far the bill gets.

In the same committee meeting, representative Jerry Sexton of Bean introduced a resolution to make the Bible the state book of Tennessee. Back in 2016, Sexton tried to get a similar bill (House Bill 0615) passed, but Tennessee’s GOP Governor Bill Haslam vetoed it. “In addition to the constitutional issues with the bill,” Haslem wrote, my personal feeling is that this bill trivializes the Bible, which I believe is a sacred text.” He added, “If we believe the Bible is the inspired word of God, then we shouldn’t be recognizing it only as a book of historical and economic significance. If we are recognizing the Bible as a sacred text, then we are violating the Constitution of the United States and the Constitution of Tennessee by designating it as the official state book. Our founders recognized that when the church and state were combined, it was the church that suffered in the long run.”

I wrote an op-ed on Sexton’s House Bill 0615. I said, “The U.S. as a whole, Tennessee included (at least to a certain degree), has become religiously diverse. The people of the state no longer share a common Christian heritage, making House Bill 016 look like little more than an attempt by legislators, perhaps threatened by such religious diversity, to protect a Christian culture that seems to be steadily eroding. Times are changing in Tennessee. While the Bible remains a valued spiritual guide–the Word of God–to many people living in the state, attempts to make it the official state book are more about heritage than history. Heritage uses the past as a bludgeon. It gives the past political power and moral authority in the present that it was never meant to have. Heritage is more concerned with exclusion than inclusion.”

The hearing on Sexton’s resolution was very revealing.

Bo Mitchell, a Democrat and a self-professed Christian from District 50 (north and west of Nashville), raised a question about how Sexton reconciled his current resolution (HJR0150) with the disestablishment clause of the first amendment to the U.S. Constitution.

Sexton responded to Mitchell by saying that the Bible should be the official state book because Nashville publishes and sells a lot of Bibles. In other words, the “word of God” has had an economic benefit to the state of Tennessee, making it deserving of official status. He then dove into a David Bartonesque defense of America’s supposedly Christian founding, even going so far to say that the judicial branch comes directly from the book of Deuteronomy. As I listened to the debate over this resolution, it was clear that each side was operating with a completely different view of American history.

Next came Gloria Johnson, a Democrat representing Knoxville. She said “that there is a power higher than the Tennessee General Assembly and that’s who the Bible answers to, not politicians.”

Next-up was Tim Rudd, a Republican representative from Murfreesboro and a self-professed “student of history.” Rudd claimed that before Tennessee was a state the Bible was the only lawbook in the territory. He backed Sexton’s resolution, but gave no historical evidence to support the idea that the 18th-century Tennessee frontier was a theocracy. 🙂

After Rudd, Paul Sherrell of Sparta spoke. He began by praising Sexton for “standing up for God and standing up for His word.” He then quoted John 3:16 and said that anyone who doesn’t believe what Jesus says in this verse is going to hell. I have no idea how this related to Sexton’s bill, but I am sure Sherrell felt God was pleased with his short speech.

Next was Rusty Grills of Newbern. He affirmed Sexton’s belief that the United States was founded as a Christian nation because presidents often say “God bless America.” He quoted Psalm 138 and said something vague about his previous conversations with Sexton about “world views.”

Glenn Casada, a Republican from Franklin, also endorsed Sexton’s resolution. He said that the Bible should be welcomed as the state book of Tennessee much in the same way that Nathan Bedford Forrest should be welcomed as part of Tennessee’s heritage. It is hard to find a clearer and more direct example of the links between Christian nationalism and white supremacy. Casada, I should add, was a birther during the Obama era.

The next speaker was Ron Travis, a Republican from Dayton. He voted no on the resolution. He referenced Proverbs 8 and said that “the Bible is the greatest book that has ever been written and there is no doubt about that in my heart.” But he added that the Bible “should be so far away from government… I just don’t believe government and religion should mix.” He voted no on the resolution.

Next up was Terri Lynn Weaver, a Republican from Lancaster. She started off with an out of context quote from founding father Benjamin Rush and then delved into the “America was founded as a Christian nation” narrative. She said that “we either honor the Bible or we don’t.” We should let our “yes be yes, and our no be no.” The rest of her speech seemed to suggest that endorsing Sexton’s resolution is a marker of one’s faith. She added that Tennessee should be a “shining light on a hill.”

Then Bo Mitchell returned to correct some of the bad history he was hearing from his fellow representatives. (He didn’t get things exactly right, but he was trying). He said that if he voted for Sexton’s resolution he would be “belittling” his religious beliefs because his God “does not fit” in “a Tennessee blue book.” Gloria Johnson, sitting next to Mitchell, gave a thumbs-up sign as her colleague spoke. Mitchell then chided Sexton and the other supporters of the resolution for their intolerance.