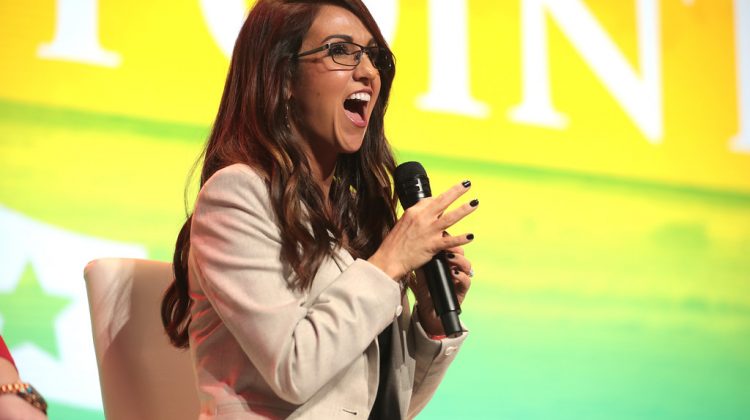 Dennis Anderson, the publisher of the Delta County (CO) Independent, didn’t know if he was watching a political rally or a revival meeting.

Lauren Boebert is a guns-rights activist and the owner of Shooters Grill, a restaurant in Rifle, Colorado where staff members carry firearms. Boebert also represents Colorado’s 3rd congressional district in the House of Representatives. She began her first term in January 2021. Since arriving in Washington, Boebert has voted to exclude Arizona and Pennsylvania from the Electoral College votes, against the impeachment of Donald Trump, and against the Biden COVID-19 relief package.

“The last two and a half months have been the longest year of my life. I can tell you story after story of what takes place in Washington D.C.” She went on to say that what surprised her the most about being in Washington is “the amount of people who are principled for the right reasons and who love God almighty. I thought there were four. There’s a whole lot more than that. That leaves me encouraged because I know that God is not giving up on us, he is not giving up on our nation. He has a plan for America. Each and every one of you is a part of that plan.” She went on to say that no matter which way the people in the room are sowing into the plan that God is blessing them.

Boebert then discussed current legislation from the so called “Equality Act’’ to the $1.9 trillion stimulus bill.

“They are counting on people to be ignorant and not reading the bill,” Boebert stated referencing the Democrats and the Equality Act. “The Constitution right there in the preamble says we are all equal. We have the 14th Amendment that says all men … and it’s okay to say men as a gender identification. All men are equal under the law. I’ve decided I don’t want Democrats to call me congresswoman. I want them to acknowledge that men is a gender neutral term and they can call me Congressman Boebert,” she said to a rousing applause.

And this on “cancel culture”:

“I refuse to bow down to cancel culture. This is nothing new. This has been around since the beginning of time. Cane cancelled Abel.” She went on to give other examples from the Bible including the early disciples of Jesus. Claiming that the Democrats are trying to cancel Christianity she said, “They tried to cancel Jesus. You can’t cancel God.”

And what would this hearing be without a reference to the pro-Trump, conspiracy theory-laded “newspaper” The Epoch Times:

The last question of the night drew a bizarre response from Boebert.

“Is there any hope for the people that top level government officials when they violate the law… will they ever be held accountable?”

“I want to tell you, I heard someone who is in very close contact with President Trump and the ins and outs of the White House under that administration. They talked to the owners of the Epoch Times and they said don’t change anything, you are right over the target. So anyone who tries and tells you that this is a fringe newspaper. Don’t listen to them. I have very good sources that tell me this is very good information. Is it 100%? I don’t know but it’s very good information. We all know that there was information that was declassified just a few days before President Trump left office. I know someone who is involved in declassifying that. This person is getting very tired of waiting on the DOJ to do something about it. And we’ll be hearing about it very, very soon. This is my opinion with that information that I have. I believe we’ll see resignations begin to take place and I think we can take back the majority in the House and the Senate before 2022.’